Utuado is a municipality of Puerto Rico located in the central mountainous region of the island known as La Cordillera Central. It is located north of Adjuntas and Ponce; south of Hatillo and Arecibo; east of Lares; and west of Ciales and Jayuya. In land area it is the third-largest municipality in Puerto Rico (after Arecibo and Ponce). According to the 2000 US Census, the city has a population of 35,336 spread over 24 wards and Utuado Pueblo (the downtown area and the administrative center of the city). The name Utuado derives from the Taíno word Otoao, meaning "between mountains". The municipality is known as La Ciudad del Viví meaning "The City of the Viví", derived from the Viví River which runs through Utuado: one river branch comes from Adjuntas and the other from Jayuya. These two rivers then meet near the Fernando L. Ribas Dominicci Avenue and continue the journey to Lago Dos Bocas.

Utuado is the main city of the Utuado micropolitan statistical area and is part of the San Juan-Caguas-Fajardo Combined Statistical Area.

Utuado was founded October 12, 1739, by Sebastian de Morfi, on behalf of 60 families from Arecibo. It was the first town established in the interior mountainous region of the island known as La Cordillera Central and the 11th oldest established municipality in Puerto Rico, following San Juan, San Germán, Coamo, Arecibo, Aguada, Loiza, Ponce, Añasco, Guayama and Manatí.

At the time of the discovery of the island on November 19, 1493, by Christopher Columbus, Puerto Rico was inhabited by the Taíno Indians. The Taínos were a culturally developed society with a universal language, a developed agricultural system, and a social organization based on caciques or chieftains. The Utuado area was ruled over by cacique Guarionex. In barrio Caguana, the Taínos built a series of courts or bateyes, Caguana Ceremonial Ball Courts Site, that is considered the best example of Taino engineering in the West Indies.

In his work El Dorado Borincano, La economia de la conquista 1510–1550, Jalil Sued Badillo gives a detailed account of the economic state of Puerto Rico during the first decades after the discovery and mentions the importance of the Otoao region. From 1510 through 1513, the island witnessed a Taíno rebellion as a result of harsh and inhumane treatment by the Spanish settlers. During the process of pacification many Spaniards settled in the area now occupied by the municipality of Utuado and set up farms (haciendas), initially on behalf of the Spanish government (Hacienda Real Dos), to provide food to the Indian slaves working the gold mines and the Spanish colonists in the area. One of the first settlers in the Otoao region in 1512 was Antonio Sedeño, the island's bookkeeper. His farm's main crop was yuca. His farm was sold in 1519 to Blas de Villasante, the island's treasurer, for 525 gold pesos.

Areas in the Utuado region that were exploited for gold include Salto Arriba, initially, then later in the 1530s Caguana and Don Alonso. In the 1530s, landowners in the Don Alonso area petitioned the Spanish Crown permission to establish a town in the area but it was never granted.

Once the gold mining era ends toward the end of the 16th century, very little is known about the Utuado region until the early 18th century. According to the Puerto Rican historian Fernando Picó, the few documents that exist indicate the area was mostly unpopulated and densely forested. On the other hand, he states that Utuado is the municipality with the most caves, that most likely served as dwellings for Indians or runaway slaves. 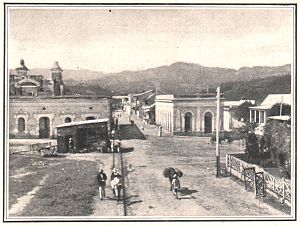 The agreement to establish the town of Utuado by the 60 families of Arecibo states they purchased the "Hato de Otoao" for 569 pesos and 5 reales from owners Manuel Natal and Felipa Román. It also states their desire to choose where on the land the town center would be located, which indicates the area was not populated yet.

During his visit to the island in 1771, Fray Iñigo Abbad y Lasierra states the principal economic activity in the Utuado region was cattle raising, horses and mules. He mentions a small amount of agricultural activity existed but the population only produced enough tobacco and coffee for their own consumption.

During the late 18th and early 19th centuries, Utuado's population continued to grow as coffee gained in importance and growers saw the need for high altitudes and mountainous terrain to produce the best coffee beans. People not only migrated from the Puerto Rican coastal towns but also from Ireland (Founder Sebastian de Morfi = Sebastian Murphy), Canary Islands and the Balearic Islands of Majorca and Minorca, all seeking the riches that coffee had to offer. 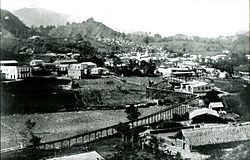 Utuado in 1896 during the coffee golden era

During the late 19th century Utuado experienced an explosive economic growth centered around the cultivation of coffee, also known at the time as oro negro or "black gold". By the 1890s Utuado was the largest producer of coffee in Puerto Rico and the second municipality (after Ponce) with the largest population. It produced a rich social life for many of its citizens and a casino and theatre were established in the town. The progress of the town was so evident that the regent Queen of Spain, María Cristina, honored the town with the title of Ciudad (City) on August 20, 1894. In 1896 or 1897 Utuado was the first city in Puerto Rico with a public electric lighting system powered by a hydraulic turbine power plant, and in that same year mayor Juan Casellas planned a train system to unite Utuado with Arecibo. By 1899 this golden era ended due to two events: the United States occupation of the island in 1898, which made sugar the new crop of importance instead of coffee (Utuado's mountainous landscape was not ideal for growing sugarcane, making it impossible for it to compete in the sugar industry), and Hurricane San Ciriaco in 1899, which destroyed the coffee haciendas. 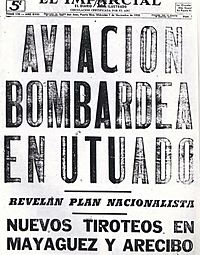 One of the most tragic moments in Utuado's history occurred on October 30, 1950, during the Utuado Uprising against United States rule, which culminated in what is known as the "Utuado Massacre". In Utuado a group of 32 nationalists, led by nationalist leaders Heriberto Castro and Damián Torres, fought against the local police during the independence revolts which occurred in various cities and towns of the island. The group was reduced to 12 men and retreated to the house of Damián Torres. Torres' residence was attacked by 50-caliber machine-gun fire from ten American P-47 Thunderbolt planes. The National Guard arrived later that day and ordered the nine men who survived the attack to surrender. Once the nationalists surrendered they were forced to march down Dr. Cueto Street to the local town plaza where their shoes, belts and personal belongings were removed. The group was then taken behind the police station where they were machine gunned. Four of the nationalists died in the act, they were nationalist leader Heriberto Castro, Julio Colón Feliciano, Agustín Quiñones Mercado, Antonio Ramos and Antonio González. González, who was 17 years old, pleaded for water and instead was bayoneted to death. 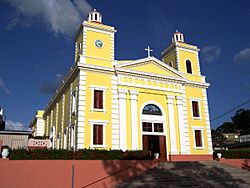 With narrow streets leading up to a central plaza surrounded by a church and the governor's house, Utuado Pueblo is an example of a town built during the Spanish Colonial era of Puerto Rico. The Iglesia San Miguel Arcangel, the local Catholic parish, was founded in 1746. The current double-steepled church was built between 1872 and 1878 and is listed in the National Register of Historic Places, along with the Caguana Ceremonial Park and the Blanco Bridge or "Puente Blanco" located in barrio Arenas joining Utuado with Adjuntas. Other buildings in Utuado Pueblo that retain their colonial architectural features include The Center for Art, Culture and Tourism in the old Tobacco Coop building, the old hospital "Hospital Catalina Figueras and Teatro San Miguel, among others. 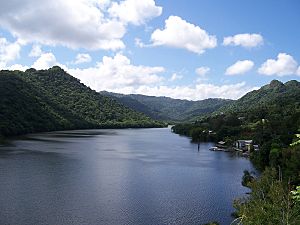 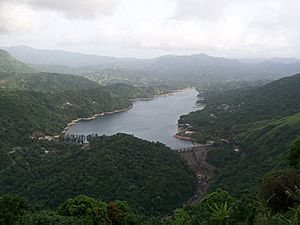 East of the Rio Abajo Forest Reserve is the Dos Bocas Lake and dam, one of several man-made lakes in Utuado. From El Embarcadero, near routes 123 and 146, boats take guests around the water to one of the many restaurants for lakeside dining.

The Caonillas Lake and dam in the western region of Utuado is another man-made lake. This reservoir encompasses over 50 square miles (130 km2) and was constructed in 1948 by the Puerto Rico Electric Power Authority.

With the recent completion of the Highway 10, Utuado has become one of the easiest towns in the interior mountainous region to reach from the San Juan metropolitan area, what used to be a 3-hour trip has been reduced to 1 hour and 30 minutes (to reach the central town).

All content from Kiddle encyclopedia articles (including the article images and facts) can be freely used under Attribution-ShareAlike license, unless stated otherwise. Cite this article:
Utuado, Puerto Rico Facts for Kids. Kiddle Encyclopedia.