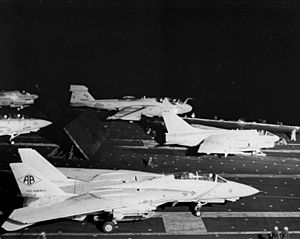 The bombing of Libya by the United States in 1986 was code-named Operation El Dorado Canyon. It was a series of air-strikes against Libya on 15 April 1986 ordered by President Ronald Reagan. The attack was made by the U.S. Air Force, U.S. Navy and the U.S. Marine Corps. It was in response to the bombing of a discotheque in Berlin. It was reported that 40 Libyan people were killed. One U.S. plane was shot down, killing two soldiers.

All content from Kiddle encyclopedia articles (including the article images and facts) can be freely used under Attribution-ShareAlike license, unless stated otherwise. Cite this article:
1986 United States bombing of Libya Facts for Kids. Kiddle Encyclopedia.