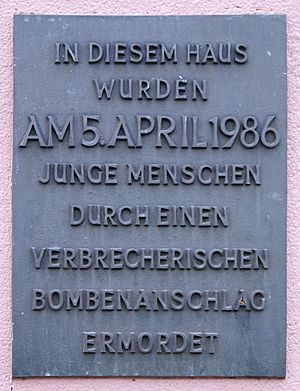 Memorial plaque reading, "On the 5th of April, 1986, young people were killed inside this building by a criminal bombing."

On April 5, 1986 three people were killed and around 230 injured when La Belle discothèque was bombed in West Berlin. The entertainment venue was commonly used by United States soldiers, and two of the dead and 79 of the injured were American servicemen.

A bomb placed under a table near the disk jockey's booth exploded at 1:45 am CET instantly killing Nermin Hannay, a Turkish woman, and US Army sergeant Kenneth T. Ford. A second American Army sergeant, James E. Goins, died from his injuries two months later. Some of the victims were left permanently disabled due to the injuries caused by the explosion.

Libya was accused by the US government of sponsoring the bombing, and US President Ronald Reagan ordered strikes on Tripoli and Benghazi in Libya ten days later. The strikes reportedly killed 15-30 people, including Colonel Gaddafi's adopted daughter. Reagan's actions were condemned by the United Nations General Assembly.

A 2001 trial in the US found that the bombing had been "planned by the Libyan secret service and the Libyan Embassy."

All content from Kiddle encyclopedia articles (including the article images and facts) can be freely used under Attribution-ShareAlike license, unless stated otherwise. Cite this article:
1986 Berlin discotheque bombing Facts for Kids. Kiddle Encyclopedia.