Jayuya is a municipality of Puerto Rico located in the mountainous center region of the island, north of Ponce; east of Utuado; and west of Ciales. Jayuya is spread over 10 wards and Jayuya Pueblo (The downtown area and the administrative center of the city). It is the principal city of the Jayuya Micropolitan Statistical Area.

Named after the Taino tribal leader, Hayuya, Jayuya is known for its skilled wood carvers. Among its monuments are the statue of Nemesio Canales and the bust of Hayuya, both by the Puerto Rican sculptor Tomás Batista.

The town of Jayuya was founded in 1911, but history traces non- indigenous settlers living in the region as far back as 1878. At that time, a small community was established there, separated from the larger cities of the coasts with little to no communication. Near the end of the 19th century, the town focused on the production of coffee, which greatly boosted the local economy.

In 1911, the town was officially declared a municipality with a population of more than 9,000.

In 1950, the town was the setting of the Jayuya Uprising, in which Nationalists started a revolt against the Government of the United States led by Blanca Canales, a social worker, and her cousins, Elio and Doris Torresola. Canales led the group into the town square and gave a speech, declaring Puerto Rico an independent republic. The police station was later attacked, telephone lines cut, and the post office burned to the ground. One police officer was killed and three others wounded in these attacks. The group held the town for three days, until it was bombed by U. S. planes supporting a ground attack by the Puerto Rican National Guard. Even though an extensive part of the town was destroyed, news of the bombing was not reported outside of Puerto Rico. It was called an incident between Puerto Ricans by the media on the mainland.

The flag is rectangular in shape and derives its symbolism from the Coat of Arms. It symbolizes the spirit of people proud of their Taíno heritage and their hospitality.

Jayuya's Coat of Arms consists of a shield with a three tower crown above, which is standard for municipalities. Inside the shield, centered at the top, a crown representing Chief Hayuya's monarchy. In the center a green band with a white border representing the Tres Picachos (Three Peaks) mountains. The green color symbolizes the countryside and the town's matron, La Virgen de la Monserrate. At the bottom of the shield, is a petroglyph known as the Taíno Sun found in Jayuya. 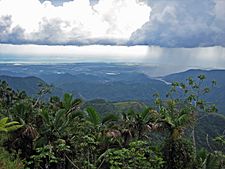 Puerto Rico's south shore, from the mountains of Jayuya, taken from Highway 143

The town's total area is estimated at 39.4 square miles (102.05 km²). Part of the Toro Negro State Forest is located within the municipality of Jayuya. Rivers like Río Naranjito and Río Yunes, as well as the Río Grande de Jayuya and its various affluents, flow through this municipality.

There are several celebrations and festivals held at Jayuya throughout the year. Two of the most known are the Tomato Festival, held in February, and the Festival Indígena (Indian Festival) held in November. 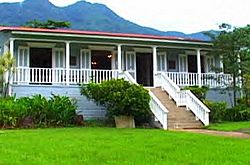 Due to its location, Jayuya is usually mentioned as the obligatory municipality to visit when visiting the center of the island of Puerto Rico. There are several landmarks for tourists to consider like the Nemesio Canales Museum and the Cemí Museum, both located in the same valley. Also, the Taíno Tomb in the city's downtown has the remains of a Taíno Indian found in an excavation. Nearby, there's a monument to Chief Hayuya, cacique of the region.

In the outskirts of the city, tourists can visit the Cerro de Punta, highest peak in the island of Puerto Rico, as well as the other mountains mentioned (Tres Picachos, for example). The Toro Negro State Forest can also be reached through the city.

All content from Kiddle encyclopedia articles (including the article images and facts) can be freely used under Attribution-ShareAlike license, unless stated otherwise. Cite this article:
Jayuya, Puerto Rico Facts for Kids. Kiddle Encyclopedia.