Cerro de Punta or just Cerro Punta is the highest peak in Puerto Rico, rising to 1,338 meters (4,390 ft) above sea level. The mountain is part of the Cordillera Central and is located in the municipality of Ponce.

The mountain is part of the Cordillera Central and is located on the border between the municipalities of Jayuya and Ponce. The access road to the point closest to the highest elevation is from the municipality of Jayuya. It is part of the Toro Negro Forest Reserve, and it has been described as "an alpine runt." It is located on the western end of the Toro Negro State Park. The mountain is just north of east-to-westbound Route 143. It is located at coordinates 18.172458 and -66.591839W. The nearest populated place to Cerro de Punta is Urbanization Vega Linda, located 3.3 miles away.

Unlike many Caribbean mountains, Cerro de Punta is not a volcano but simply the highest point in the Cordillera Central. Cordillera Central is the central mountain range that divides the island by running in an east-west fashion. 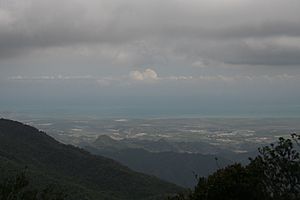 The view from atop Cerro de Punta is said to be "the best view in all of Puerto Rico". On a clear day, it is possible to see virtually the entire island, including as far as San Juan, which is over 75 miles away. There are a number of radio and television transmission and re-transmission towers just off the top of the mountain. There is an observation platform at the top of the mountain.

The mountain is home to an abundant amount of wildlife, lush vegetation, flowering shrubs and trees, and numerous waterfalls. The mountain is covered by palm trees. Various plants, including some endangered species are found here. The endangered fern Elaphoglossum serpens is found only on this mountain and nowhere else in the world. 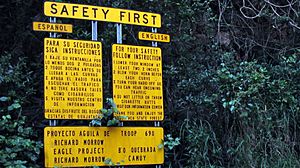 The area consists of many steep mountains. The nearest road is PR-143, which is a winding two-lane mountain road that must be travelled very slowly as it is not possible to see traffic coming from the opposite direction for any significant length. Off Route 143 is the road that actually leads to the mountain's top. Route 143 can be accessed via the better-traveled Route 10. Route 143 is part of the Ruta Panorámica. 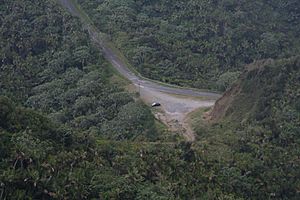 A nearby inn called Hacienda Gripiñas, has a trail that leads to the top of the mountain. Hacienda Gripiñas was a coffee plantation, but has been turned into a country inn. It actually still grows some coffee. The inn operates under a contract with the Government of Puerto Rico. The trails, however, are not well marked and often suffer damage from storms. While people can hike their way to the top of the mountain, there is a paved road that leads to the very summit. The Toro Negro State Forest has 12 miles of hiking trails some of which lead to the top of Cerro de Punta.

All content from Kiddle encyclopedia articles (including the article images and facts) can be freely used under Attribution-ShareAlike license, unless stated otherwise. Cite this article:
Cerro de Punta Facts for Kids. Kiddle Encyclopedia.