It would become the largest coffee plantation in Lares, with over thirty slaves and hundreds of day laborers working the 69 cuerdas of coffee farm. For many years the plantation was a large producer and exporter of coffee. Day laborers, jornaleros or braceros from Lares worked in the coffee fields of the hacienda. In 1880, it was owned by Miguel Marquez Enseñat.

It is now owned by Edwin Soto and his family, who invested millions into its restoration and operate the hacienda as a hotel, coffee shop and museum. Coffee growing in Puerto Rico has seen a resurgence and Hacienda Lealtad produces coffee under the brand Café Lealtad. The Café Bistro Hacienda Lealtad on Puerto Rico Highway 128 kilometer 55.8, is where groups meet for the start of their tour of the 19th century coffee plantation. 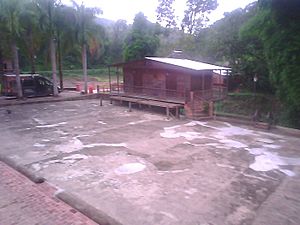 The "Glácil" is the area where 21 female slaves worked, setting the coffee out to dry, under the sun.

Lares was founded on April 26, 1827 and became an important location of coffee production in Puerto Rico. In 1830, Juan Bautista Plumey established Hacienda Lealtad, the coffee producing farm. Plumey, a French immigrant had come to Lares with 32 slaves. On May 20, 1833, he married Petronila Irizarry from nearby San Sebastián, Puerto Rico (Pepino) and they had twelve children. José María Marxuach Echavarría, twice mayor of San Juan, married one of Juan Bautista Plumey daughters. 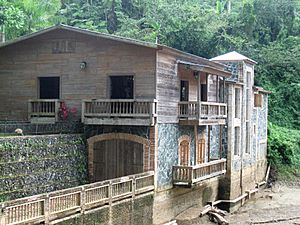 After Plumey established Hacienda Lealtad, it became the largest and most modern of its time given it was the first to generate its own electricity to power the hacienda's machinery and mills. A canal and aqueduct guided water from the mountainside to a 17-foot hydraulic wheel to generate power to the plantation. 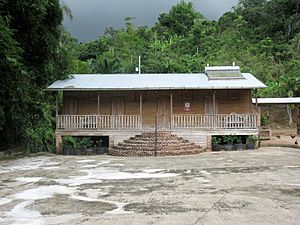 The slave quarters at Hacienda Lealtad was renovated.

By 1846, Juan Bautista Plumey's hacienda which at the time was called Hacienda La Esperanza "was the only property labeled as an hacienda in official documents. He had 69 cuerdas planted in coffee worked by 33 slaves." Plumey did not allow his workers to work on any other farm.

In 1868, Lares was the site of Grito de Lares, a two-day revolt against the crown of Spain. While some documents state that people from Hacienda Lealtad participated in the revolt, a historian named Joseph Harrison Flores, with the National Archives of Puerto Rico, studied the history of the estate and Grito de Lares stated that only an eight-year-old child of a slave from Hacienda Lealtad was at the revolt, and spent 6 months in prison.

In 1873, slavery was abolished and a few years later, "by the 1880s coffee had replaced sugar as Puerto Rico's leading export staple and principal source of wealth."

In 1880, when it was called Hacienda Paraiso, it was owned by Miguel Marquez Enseñat who paid workers with hacienda token money, which could only be used to purchase goods from a store at the hacienda itself.

Coffee production and exportation dropped considerably after Puerto Rico passed to the United States with the 1898 Treaty of Paris, and eventually the plantation fell into disuse and decline.

The place had sentimental value to Edwin Soto, a Puerto Rican businessman, who had picked ripe coffee beans there as a child, with his family. Soto who had become a self-made millionaire decided he would buy the hacienda. Still, Soto's initial intentions for the property, when he purchased it in 2007, were to keep it as a second home. Later he decided to restore and conserve it for its historic importance. Soto invested millions of dollars into its restoration and Hacienda Lealtad now features a hotel, coffee shop, and educational tours for local and international tourists. It also serves as a place for people in the agriculture and coffee industry to meet and hold workshops.

Tours were underway regularly until Hurricane Maria hit on September 20, 2017. A week after a relieved Soto reported that Hurricane Irma had not done much damage to the coffee trees on the estate, Hurricane Maria destroyed all the coffee trees, around 60,000. Clean-up, restoration and planting began anew soon afterwards and tours and functions at the hacienda resumed. 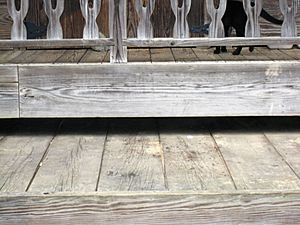 Corredoras were used to protect coffee beans from rain.

The 19th century, coffee farming culture of Puerto Rico where jornaleros and slaves processed coffee for its distribution to Europe, is on display at Hacienda Lealtad. Educational tours where people can learn about coffee cultivation are available, by reservation, and the main attractions are:

There's been a resurgence in coffee growing in Puerto Rico, despite the lack of manpower and other challenges facing coffee farm landowners. Hacienda Lealtad in Lares has a coffee shop called Café Bistro Hacienda Lealtad. Café Lareño Coffee Shop is nearby and other such chic coffee shops have opened up along the mountainous hilltops of Lares and other municipalities in Puerto Rico. Lares has been the Puerto Rican municipality with the largest emigration to the mainland United States, since being hit by a severe economic recession.

All content from Kiddle encyclopedia articles (including the article images and facts) can be freely used under Attribution-ShareAlike license, unless stated otherwise. Cite this article:
Hacienda Lealtad Facts for Kids. Kiddle Encyclopedia.