Christopher Joseph Isaak (born June 26, 1956) is an American rock musician and occasional actor. He is best known for his hit "Wicked Game," as well as the popular hit songs "Baby Did A Bad Bad Thing" and "Somebody's Crying." He is renowned for his signature 1950s rock & roll style and crooner sound, as well as his soaring falsetto and reverb-laden music. 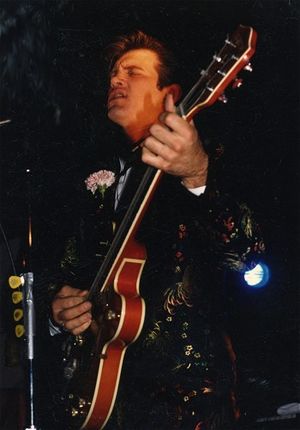 He is closely associated with film director David Lynch, who has used his music in numerous films and gave him a large role in the film Twin Peaks: Fire Walk with Me. His songs generally focus on the themes of love, loss and heartbreak. With a career spanning four decades, he has amassed a total of twelve studio albums, and has accumulated numerous award nominations and tours. He has been called the Roy Orbison of the 1990s, and is often also compared to Elvis Presley, Ricky Nelson and Duane Eddy.

Isaak was born in Stockton, California. 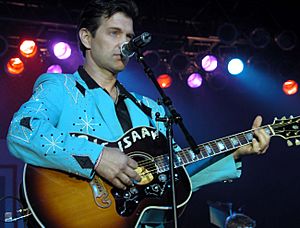 Isaak at a USO show in Washington, D.C.

Isaak revealed in a 2002 interview with Acoustic Guitar that he uses a one-of-a-kind Gibson:

For my electric, I've got a one-off Gibson version of a Gretsch 6120, a sort of Chet Atkins thing. They made one of these things and gave it to me to see if I liked it, and I liked it so much I've been playing it ever since. People told me they thought it was a White Falcon, but it's not. It's just a white Gibson. I don't think they ever manufactured any of the things. They strung up this one prototype, scratched their heads, and said, 'Huh. Give it to Isaak.'

Isaak also plays a Gibson J-200 acoustic guitar, which he uses for songwriting.

All content from Kiddle encyclopedia articles (including the article images and facts) can be freely used under Attribution-ShareAlike license, unless stated otherwise. Cite this article:
Chris Isaak Facts for Kids. Kiddle Encyclopedia.