Kids Encyclopedia Facts
For the former convention and exhibition center located on the site of ICC Sydney, see Sydney Convention and Exhibition Centre. 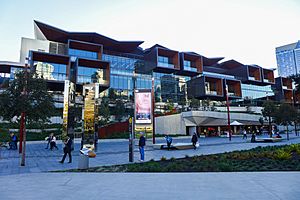 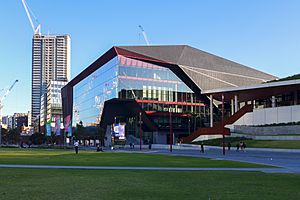 ICC Sydney includes convention spaces for 2,500, 1,000 and 750 people. It also includes a flexible space of 2,500 square metres (27,000 sq ft) and the largest ballroom in Sydney, able to accommodate 2,000 people. ICC Sydney is within walking distance to over half of Sydney's 33,000 hotel rooms and is just 8 km (5 mi) from the Sydney International Airport. The ICC Exhibition Centre and Entertainment Centre includes 33,000 square metres (360,000 sq ft) of exhibition space, which can be divided into smaller spaces according to requirements. The first major event held at the newly developed centre was RTX Sydney hosted by Rooster Teeth Productions on 4 - 5 February 2017.

ICC Sydney is located in the Darling Harbour, skirting the centre of the Sydney central business district and just 8 km (5 mi) from the Sydney International Airport. ICC Sydney is positioned on the waterfront, near Cockle Bay and Tumbalong Park.

ICC Sydney opened adjacent to a new global financial services hub Barangaroo, as well as media, technology and knowledge centres. It features multiple public access points, with the option of visiting the precinct via a choice of walking or transport options including, road, light rail, train and ferry.

ICC Sydney was designed by two architectural firms, Hassell and Populous, in a contemporary modern style. It replaces the former Sydney Convention and Exhibition Centre that was demolished in December 2013. Construction began in early 2014; an estimated 32,000 cubic metres (1,100,000 cu ft) of concrete will be used to construct the building.

ICC Sydney is an A$1.5 billion development being delivered through a Public Private Partnership (PPP) with the New South Wales Government and Darling Harbour Live (comprising Lend Lease, Hostplus, Capella Capital, AEG Ogden and Spotless). The development of ICC Sydney is part of a broader A$3.4 billion revitalisation of Darling Harbour. Upon completion, ICC Sydney will adjoin a new 590 room luxury hotel tower (under the Sofitel brand), a residential and commercial development (Darling Square), pedestrian boulevard and improved public domain that are all being created as part of the Darling Harbour development. The development will also include a reconfiguration of Tumbalong Park, providing an additional 3,000 m2 (32,000 sq ft) of green space acting as a new adaptable event space.

Twenty large international conventions are scheduled for ICC Sydney, including:

During the 2018 Suncorp Super Netball season, the main theatre hosted two netball matches, one an intra-city derby between Giants Netball and the New South Wales Swifts and the other between the Giants and the West Coast Fever. Despite not being designed with indoor sport in mind, the theatre was utilised by the league due to a lack of stadium availability elsewhere in the city. The venue is unlikely to host netball again, as both clubs will move into a permanent multi-purpose facility at the Sydney Olympic Park Tennis Centre in 2020.

All content from Kiddle encyclopedia articles (including the article images and facts) can be freely used under Attribution-ShareAlike license, unless stated otherwise. Cite this article:
International Convention Centre Sydney Facts for Kids. Kiddle Encyclopedia.