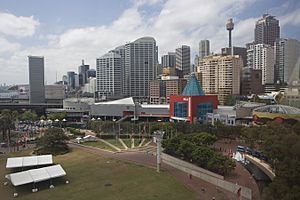 Tumbalong Park with Sydney CBD in the back 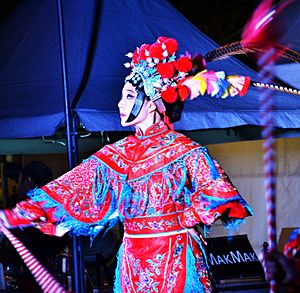 Tumbalong Park is a park in Darling Harbour, located in Sydney, Australia. The parkland was designed using native Australian foliage incorporated with fountains as an urban stream. The name "Tumbalong" is from Dharug as spoken by the Eora nation and means "place where seafood is found".

The park is used as a venue for central Sydney events, including New Year's Eve and Australia Day celebrations. This site was used for the skydiving opening scene in 20th Century Fox's Mighty Morphin Power Rangers: The Movie.

It used to be the location for Sega World Sydney which opened in 1997 and closed in November 2001.

The park is adjacent to the Chinese Garden of Friendship.

Public toilets, cafes and restaurants are located on the park's fringes.

The park is a free public space.

There are many buses travelling down Market, Park, Druitt, Bathurst or Liverpool Streets.

The park can also be accessed by catching a ferry to Darling Harbour, alighting at King Street Wharf or Pyrmont Bay Wharf.

The park can also be accessed by light rail from Central Train station, alighting at Paddy's Market light rail station.

There are also car parking stations nearby.

All content from Kiddle encyclopedia articles (including the article images and facts) can be freely used under Attribution-ShareAlike license, unless stated otherwise. Cite this article:
Tumbalong Park Facts for Kids. Kiddle Encyclopedia.