Newport derived its name from being a "new port" for steamers carrying passengers and cargo such as local shell lime and firewood. Bungan Castle is a medieval-style stone castle on Bungan Head built in 1919 by Adolph Albers, a German art dealer.

Newport sits between the Pacific Ocean to the east and Pittwater to the west. Its ocean beach is patrolled by Newport Surf Life Saving Club. On the shores of Pittwater are several marinas and small shipyards, including the Royal Prince Alfred Yacht Club and the Royal Motor Yacht Club, serving mainly pleasure craft. Newport also features many cafes and restaurants, as well as the Newport Arms Hotel on the shore of Pittwater. 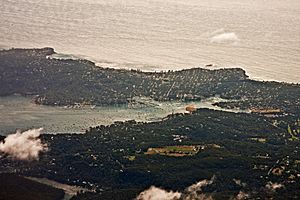 All content from Kiddle encyclopedia articles (including the article images and facts) can be freely used under Attribution-ShareAlike license, unless stated otherwise. Cite this article:
Newport, New South Wales Facts for Kids. Kiddle Encyclopedia.