Mona Vale is a suburb in northern Sydney, in the state of New South Wales, Australia. It is located 28 kilometres north of the Sydney central business district and is the administrative centre of the local government area of Northern Beaches Council. Mona Vale is also part of the Northern Beaches region.

The area was known as Bongin Bongin by Aborigines. The first land grants in the district of Pittwater were not made until the 23 April 1813. The land that now comprises Mona Vale was granted to Robert Campbell (1769-1846), and was surveyed in May 1814, and was originally part of 700 acres (2.8 km2) that extended from Mona Vale to the end of Newport beach. Mona Vale in Scotland may have inspired Campbell’s choice of name for the area. Dr. William Bryan was the first mayor of Mona Vale. In 2005, Mona Vale became the administrative centre of Pittwater Council after the council chambers moved from Warriewood. Pittwater Council has since been amalgamated with Warringah and Manly to form the Northern Beaches council.

Mona Vale has two primary schools and a high school, a RSL club, a park, a public library, a golf course, a hospital, a skatepark, a bus depot, three supermarkets and a variety of shops. Mona Vale Hospital is the district hospital, whose maternity section was closed due to an asbestos scare and reopened in 2013. It also has several pathways for good walking.

Mona Vale has a shallow beach (formerly known as "Bongin Bongin Beach") which has a children's and lap pool at its northern end, and the beach adjoins a golf course and beach reserves. There is a second beach north of this which is known as "The Basin" with a concentrated wave known as 'Whomp' which is popular with body boarders. Mona Vale is a popular beach for surfing with beach breaks including "Main", "Suck Rock" and "Rip Bowl".

Mona Vale is at the junction of two major roads in Sydney: Mona Vale Road (A3) and Pittwater Road (A8). 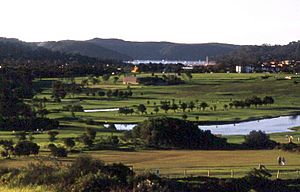 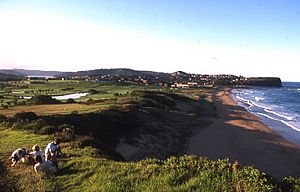 Mona Vale is accessible by bus, and there is a bus depot located on Darley Street.

Mona Vale Beach is near Bungan Beach but they are not the same.

All content from Kiddle encyclopedia articles (including the article images and facts) can be freely used under Attribution-ShareAlike license, unless stated otherwise. Cite this article:
Mona Vale, New South Wales Facts for Kids. Kiddle Encyclopedia.