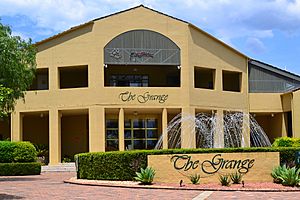 The Grange Village, an over 55s lifestyle village built by Lend Lease 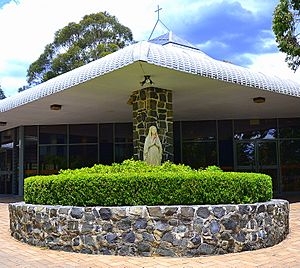 Our Lady of the Rosary Cathedral

Waitara is a suburb of Upper North Shore Sydney, in the state of New South Wales, Australia 19 kilometres north-west of the Sydney central business district, in the local government area of Hornsby Shire.

Myles McRae once owned land in Southern Sydney, near Hurstville. When he sold that land to a development company, the manager used the name Waitara for the subdivision project. McCrae later bought land near Hornsby and when the railway station opened in 1895 he suggested the name Waitara, which was formally adopted.

Waitara railway station is on the North Shore & Western Line of the Sydney Trains network. It was originally known as Sandy Bank.

The 2011 census community profile for Waitara revealed roughly equal proportions of men (48.1%) and women (51.9%) in a total population of 5,370. The median age of the Waitara population was 34 years of age, which was similar to the national median of 37. The most common ancestries in Waitara (State Suburbs) were English 16.3%, Chinese 15.1%, Australian 12.6%, Indian 7.7% and Korean 6.2%. The average household had 2.3 people. The most common religious affiliation was "no religion".

All content from Kiddle encyclopedia articles (including the article images and facts) can be freely used under Attribution-ShareAlike license, unless stated otherwise. Cite this article:
Waitara, New South Wales Facts for Kids. Kiddle Encyclopedia.