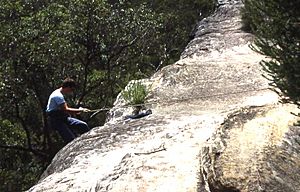 Abseiling in bush near Cliff Avenue

North Wahroonga is bounded by the F3 Sydney-Newcastle Freeway on the west and the Ku-ring-gai Chase National Park on the north.

Wahroonga is an Aboriginal word meaning our home.

In the early days of British settlement in New South Wales, the main activity was cutting down the tall trees which grew there. The Wahroonga area was first settled in 1822 by Thomas Hyndes, a convict who became a wealthy landowner. Later there were many orchards, and when the railway was built it became a popular place for businessmen to build out-of-town residences with large gardens in the 1920s and 1930s.

All content from Kiddle encyclopedia articles (including the article images and facts) can be freely used under Attribution-ShareAlike license, unless stated otherwise. Cite this article:
North Wahroonga, New South Wales Facts for Kids. Kiddle Encyclopedia.