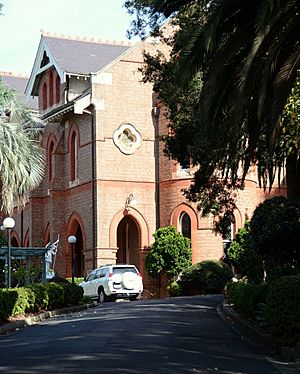 Normanhurst is a suburb on the Upper North Shore of Sydney, in the state of New South Wales, Australia, 22 kilometres north-west of the Sydney central business district in the local government area of Hornsby Shire.

Normanhurst was originally known as Hornsby, with the suburb that is now known as Hornsby called Jack's Island. The construction of the Main Northern and North Shore railway lines in the 1890s brought about a name change. The two lines were joined at a station called Hornsby Junction, whereas the station one stop south on the Northern line kept the name Hornsby. Due to confusion around the similarly named stops, the postmaster demanded that Hornsby station change its name.

The railway station originally known as 'Hornsby', opened on 21 November 1895 and the name was changed to Normanhurst in 1900.

The first Hornsby Post Office opened on 1 August 1864 and was renamed South Hornsby in 1900 and Normanhurst in 1905.

Normanhurst was derived from the name of a prominent resident, civil engineer Norman Selfe (1839–1911), with hurst being the English word for a wooded hill. Ironically, Selfe protested against the name change. The railway station was renamed in 1900 and was used for the suburb that developed around it.

Normanhurst is divided by Pennant Hills Road, a major north-south thoroughfare that leads north to the M1 Motorway, and south towards Parramatta. However, both the east and west sections have extensive bush access. On the east side, a small section of bush lies between Normanhurst and Fox Valley. This is land occupied by the SAN Hospital. On the western side, the suburb backs onto the southern reaches of the Berowra Valley, a continuous section of bush stretching all the way to Broken Bay. This gives Normanhurst a very "leafy" and rural look, in comparison to its neighbours Hornsby, Pennant Hills and Thornleigh. This in turn contributes to making native bird life abundant. The area is home to cockatoos, rainbow lorikeets, kookaburras, noisy miners and native brush turkeys. Additionally, Normanhurst has several small waterfalls, which promote reptile life. It also has encouraged the growth of retirement residences in the suburb.

Normanhurst is serviced by rail and buses. Normanhurst railway station is on the Northern Line of the Sydney Trains network. Transdev NSW's Upper North Shore service provide bus services to the area.

At the 2016 census, only 31% of employed people travelled to work on public transport and 53.1% by car (either as driver or as passenger). Pennant Hills Road is a major highway in Sydney.

All content from Kiddle encyclopedia articles (including the article images and facts) can be freely used under Attribution-ShareAlike license, unless stated otherwise. Cite this article:
Normanhurst, New South Wales Facts for Kids. Kiddle Encyclopedia.