Kids Encyclopedia Facts
This page is about the suburb of Sydney, Australia. For the secondary school in Bolton, UK, see Thornleigh Salesian College. 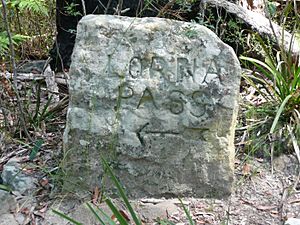 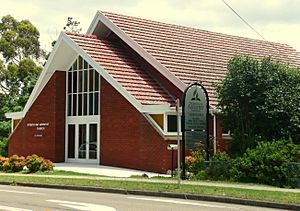 Thornleigh is a suburb of Sydney, in the state of New South Wales, Australia 25 kilometres (16 mi) north-west of the Sydney central business district in the local government area of Hornsby Shire. Thornleigh is bounded to the north by Waitara Creek. Thornleigh borders the suburbs of Normanhurst, Westleigh, Hornsby, Wahroonga and Pennant Hills. It is considered part of the Northern Suburbs of Sydney.

Thornleigh offers great district views and the topography varies greatly with many properties built around bushland settings and into the hills to afford the great views. Top streets are considered the top of Tillock Street and Wanawong Drive for some of the suburbs best views and proximity to the train station.

The first non indigenous people to explore the area of Thornleigh were a party led by Governor Arthur Phillip in 1788. Settlers moved into the area in the 1830s and among them were James Milson, Patrick Duffy, John Thorn and Samuel Horne.

Thornleigh is named after Constable John Thorn, who, along with Constable Horne, captured bushrangers Dalton and John MacNamara, leader of the North Rocks gang, on 22 June 1830, and were granted land as a reward in 1838. Horne's land became Hornsby, and Thorn's land became Thornleigh. The railway line was built in the 1880s and development followed.

As part of the construction of the railway from Strathfield to Hornsby, a 1.2km branch was constructed in 1884 by the contractors to a quarry in a gully west of Thornleigh. The tracks included a zig zag section.

In 1901, the National Brickworks started operations at Thornleigh. In 1913, the largest malt works in the southern hemisphere was established by WG Chilvers.

During the Great Depression of the 1930s, unemployment was a problem in the area, so a local woman named Lorna Brand raised money for the construction of a walking track near the Lane Cove River as a way of providing relief work. The track begins at Thornleigh Oval, at the bottom of Handley Avenue, and goes through the bush towards the Lane Cove River. It then goes parallel to the river for a short distance before looping back to arrive at Comenarra Parkway. An extension goes down to the river, through a spot called Conscript Pass. At this spot, there are rock carvings done by the men who worked on the track. One of the carvings is a caricature of Bertram Stevens, Premier of New South Wales from 1932 to 1939. The track is known as Lorna Pass in memory of Lorna Brand, and is now part of the Great North Walk, a long-distance walking trail between Sydney and Newcastle.

Thornleigh railway station is on the North Shore, Northern & Western Line of the Sydney Trains network. Pennant Hills Road is part of the National Highway, and is one of Sydney's major thoroughfares. The Esplanade from Pennant Hills is a main road accessing Thornleigh to Normanhurst.

All content from Kiddle encyclopedia articles (including the article images and facts) can be freely used under Attribution-ShareAlike license, unless stated otherwise. Cite this article:
Thornleigh, New South Wales Facts for Kids. Kiddle Encyclopedia.