Brooklyn is a town in the state of New South Wales, Australia, in the local government area of Hornsby Shire with a population of 722 as of the 2016 census. Brooklyn is surrounded by the Muogamarra Nature Reserve and occupies a strip of waterfront along the southern bank of the Hawkesbury River.

The town provides a range of amenities and activities, while maintaining a quiet village atmosphere. Brooklyn provides convenient access for North Shore residents and day trippers to the Hawkesbury River and Pittwater waterways for boating, swimming and fishing, and to Ku-ring-gai Chase and Muogamarra National Parks for bushwalking and scenic views. Hornsby Council is currently developing a 'Brooklyn Master Plan' to provide for further improvement of the amenities in the area.

The Hawkesbury River train station provides train services to the city, North Shore areas, and the Central Coast. The Pacific Highway and the M1 Motorway are both nearby and provide easy access to the town. Ku-ring-gai Chase National Park borders the suburb to the south. Long Island runs parallel with the suburb on the opposite side of Sandbrook Inlet and is joined to Brooklyn by the railway causeway. Dangar Island is sited to the northeast. 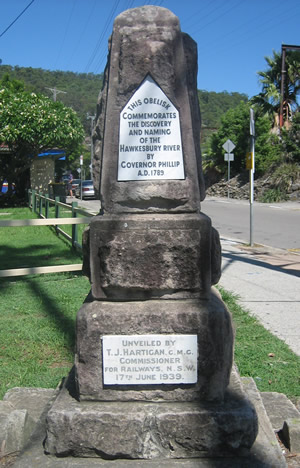 The Hawkesbury River was named by Governor Phillip in 1789 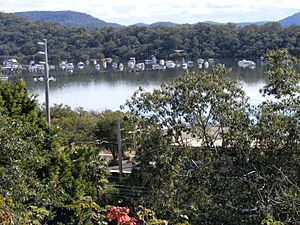 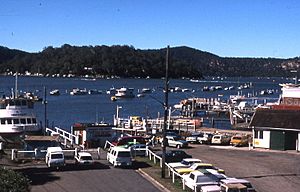 The general area was known as Peat's Ferry crossing for a long time until January 1884 when a plan of survey for the subdivision of land owned by Peter and William Fagan was registered with the suburb name of Brooklyn. A hotel of the same name followed later in the year. The town owes its existence and location to the main northern railway line with the railway arriving in Brooklyn in 1887 when the single track section north from Hornsby was completed.

In January 1886, the Union Bridge Company from New York was awarded the contract to build a railway bridge across the Hawkesbury River. The Hawkesbury River Railway Bridge was the final link in the Eastern seaboard rail network and was a major engineering feat at the time of its construction. "Hawkesbury River" was the original platform name when the station opened in 1887 but the nomenclature varied over the following twenty years with the names "Flat Rock", "Brooklyn" and "Hawkesbury" all being used until the final change in 1906 to Hawkesbury River.

Brooklyn is positioned at the northern end of the Cowan Bank, a scenic stretch of steep track on a 1 in 40 grade. The line drops 200 metres from the ridgetop near Cowan to almost water level, passing through four tunnels in the process. Prior to electrification and diesel locomotives, Brooklyn was a staging post for trains heading south to Sydney with "push up" or bank engines being attached to the rear of steam trains here for extra assistance on the eight kilometre climb to Cowan.

There have been three major railway accidents in Brooklyn over the years. On 21 June 1887, an excursion train from Sydney ran out of control down the steep Cowan Bank. There were two other trains full of holidaymakers standing at the platforms at Hawkesbury River railway station and disaster was only averted by the alert station master who could hear the roaring engine and frantic whistling. He dispatched a railway porter to throw the points lever open and divert the runaway down a siding that led to the new bridge site. The train lost speed along the railway causeway out to Long Island and collided with some empty wagons. The locomotive slid off the embankment and ended up partially submerged in the river. The engine driver was trapped in the cabin and drowned but the fireman escaped. The toll was six dead and seventy injured.

On 20 January 1944 the local bus stalled across the railway tracks at the level crossing in Brooklyn Road and was hit by the north bound Kempsey mail train. Seventeen people were killed. On 6 May 1990 an interurban electric train ran into the rear of the heritage steam train 3801 which had stalled climbing the Cowan Bank. Six people lost their lives.

Early road traffic was conveyed across the river by George Peat's ferry and prior to the first road bridge being completed there were two vehicular ferries in operation, the "Frances Peat" and the "George Peat". The new concrete road laid down between Hornsby and Gosford had been completed by 1930 and the increased traffic was beyond the capacity of the ferries. Long queues formed on holiday weekends as vehicles awaited their turn.

Work began on the first road bridge in September 1938 and it opened in May 1945. The width and depth of the river between Kangaroo Point and Mooney Mooney presented problems. The total distance to be covered was nearly 800 metres, but an embankment of fill was built out from the northern side, and the actual bridge spans only covered 580 metres. The southern foundation pier was sunk to 233 feet below high water before reaching bedrock, only 8 inches (20 cm) short of a world record. The bridge cost A£190,000 to build. This was supplemented by a second road bridge, a six-lane concrete construction that was completed in 1973 as part of the Sydney to Newcastle freeway.

In 1901 the Duke and Duchess of York (later King George V and Queen Mary), whilst in Australia for the inaugural opening of federal parliament, anchored their yacht the "Ophir" in Cowan Creek and boarded the paddle wheel steam boat the "General Gordon" for a tour of the lower Hawkesbury.

A small obelisk unveiled in 1939, adjacent to the railway station and the avenue of tall palms in McKell Park, commemorates the discovery and naming of the Hawkesbury River by Governor Phillip in 1789. 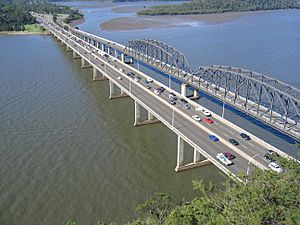 Brooklyn is the base for Hawkesbury Cruises running The Riverboat Postman each weekday at 10:00 am, and by Brooklyn Ferry Service running the Dangar Island ferry from 6:00 am every day.

The southern ends of the Pacific Motorway (M1) Brooklyn Bridge and the Pacific Highway Peats Ferry Bridge across the Hawkesbury River are located at Kangaroo Point. It has been termed "the entrance to Sydney" by those commuting from the north. The first Australian five-pound note included a picture of Kangaroo Point. In 2012 the Hornsby Shire Council undertook building work to construct viewing platforms and recreational areas.

Boating and fishing are the major tourist attractions in Brooklyn. There is a good boat launching facility at the eastern end of the suburb in Parsley Bay and several local marinas offer houseboat hire.

McKell Park is a popular spot for weekend picknickers with superb river views and an enclosed tidal swimming pool.

The Riverboat Postman leaves Ferry Wharf in Dangar Road adjacent to the railway station on its daily run (Monday – Friday) delivering mail and supplies to the water access only communities of Dangar Island, Wobby, Bar Point, Marlow Creek and Milsons Passage. The trip is popular with tourists.

Brooklyn is surrounded by reserves with plenty of scope for bushwalking. The Great North Walk, a bushtrack that runs from Sydney to Newcastle passes through the town. The Muogamarra Nature Reserve is open for several weeks each year during the spring wildflower season. An entry charge applies, and there are guided and unguided walks within the reserve which is closed to the public outside these times. A wide variety of very good aboriginal rock carvings can be seen here along with sections of the old Peats Ferry Road.

Other facilities include The Angler's Rest, a hotel with accommodation, several seafood cafes and restaurants, holiday rental accommodation, and boat mooring and hire. 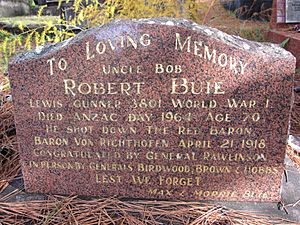 All content from Kiddle encyclopedia articles (including the article images and facts) can be freely used under Attribution-ShareAlike license, unless stated otherwise. Cite this article:
Brooklyn, New South Wales Facts for Kids. Kiddle Encyclopedia.