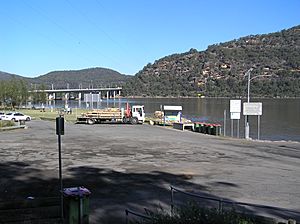 Deerubbun Reserve, showing the Hawkesbury River Bridge (with Peats Ferry Bridge behind) in distance, with various public facilities in foreground. 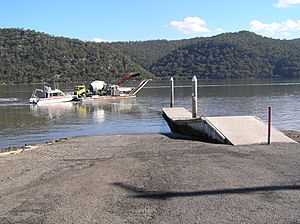 Mooney Mooney is a suburb of the Central Coast region of New South Wales, Australia, at the end of a peninsula extending southwards into the Hawkesbury River estuary situated 48 kilometres (30 mi) north of Sydney. It is where the Pacific Motorway and Pacific Highway cross from the Central Coast into Sydney's metropolitan area at Brooklyn in the Hornsby Shire.

Mooney Mooney is significant 'for its association with the early settlement of coastal NSW', according to a plaque at Deerubbun Reserve. In 1844, an early-colonial settler, George Peat, commenced a ferry service across the Hawkesbury River, from Mooney Mooney Point to Kangaroo Point on the southern bank. By 1930 this service was replaced by two diesel-powered vehicular ferries which became obsolete on completion of the Peats Ferry Road Bridge in 1945. Remnant timber piles of the former ferry docks, preserved in situ for posterity, can be seen on the foreshore of Mooney Mooney Point.

Mooney Mooney is part of the Central Coast Council local government area. The locality includes Peat Island and Spectacle Island, and formerly included Cheero Point to the north, but this locality was separately gazetted on 21 March 2003.

Mooney Mooney's topography is characterised by a rocky foreshore onto the Hawkesbury River and a hilly landscape with slopes ranging from moderate to very steep. Land use is dominated by the north-south transport corridors, comprising the F3 Sydney-Newcastle Freeway and the Pacific Highway, and two adjoining residential areas east of the highway. Oyster farms and related depuration depots are located in the suburb's south. The locality is serviced by sealed roads, electricity, telephone and reticulated water supply.

Linked by a causeway, the former Peat Island hospital, to the west, is now operated by the Department of Community Services. The 36.4-hectare (89.9-acre) Spectacle Island, to the east, is an offshore nature reserve managed by the National Parks and Wildlife Service.

All content from Kiddle encyclopedia articles (including the article images and facts) can be freely used under Attribution-ShareAlike license, unless stated otherwise. Cite this article:
Mooney Mooney, New South Wales Facts for Kids. Kiddle Encyclopedia.