Galston is a semi-rural town located in the Hornsby District of Sydney, in the state of New South Wales, Australia. Galston is located from the city at 36 kilometres north-west of the Sydney central business district, in the local government area of the Hornsby Shire. Galston is in the NSW state electoral district of Hornsby and Federal division of Berowra. Galston is situated 16 minutes away from the suburb of Hornsby.

The aboriginal inhabitants of the region were from the Dharug language group. The area was originally known as Upper Dural until early settler Alex Hutchinson suggested in 1886 that the new school be named Galston after the town of Galston, East Ayrshire in Scotland. Galston had been an agricultural town since European settlement began, and it was home to a huge number of orchid growers. Galston Public School, Fagan Park and Waddell Cottage are some notable historical places in Galston. In 1973 Galston was proposed as one option for Sydney's second international airport but this proposal did not proceed.

Galston Gorge is located between Galston and Hornsby Heights. Galston Gorge is at the bottom of Galston Road, a winding road with a number of hairpin bends. Galston Gorge is the most direct route from Galston to Hornsby, carrying over 5,000 vehicles per day. As seen in the photograph the Galston Gorge road does get extremely wet and occasionally surface flooding occurs during heavy rain. The design of the Galston Gorge road is such it requires heightened care when driving or riding - it was built originally for horse and cart. Serious accidents are common on this stretch of road. Wild chickens inhabit the lower reaches and can often be seen scratching around in the leaf litter beside the road. In January, 2014 a car flipped in the Galston Gorge. Over the years the Gorge has been blocked by oversized vehicles attempting to enter the Gorge. Vehicles over 7.5 metres are not permitted to enter the Gorge. A roundabout at the intersection of Calderwood Road and Galston Road has a barrier to prevent vehicles over 7.5 metres from entering the Gorge. Cameras are positioned next to the roundabout to record over sized vehicles that attempt to enter the Gorge, and significant fines are imposed. 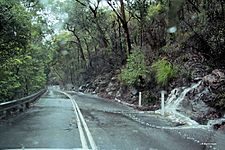 History Cottage, owned by Hornsby Council and located next to Hayes Park (Galston Recreation Reserve), is the home of the Dural & District Historical Society.

The Buddhist Golden Wheel Temple on Galston Road is a modern building with magnificent gardens tended by members of the temple community. The gardens, which feature flowering peach trees, are open to the public in early September each year.

The Crusader Union of Australia runs a Christian education campsite at 8 Crusader Road, Galston. In a bushland location, The Galston Gorge Conference & Recreation Centre is used for church camps, music camps, school camps and community groups and accommodates up to 200 guests in lodges with ensuite bathrooms and lounge areas.

Fagan Park is a large recreation area located at Arcadia Road opened in 1988. It includes the Gardens of Many Nations and a picnic area at Carrs Bush. Fagan Park was originally owned by the Fagan family as farming land before it was donated to the Department of Lands where then the land was appointed to the Hornsby Shire Council who currently maintain the land. Fagan Park's ecogarden was featured on a Gardening Australia episode which was broadcast on 12 July 2014. 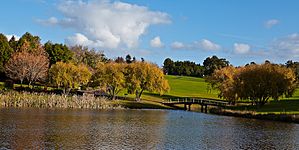 Hornsby Shire's largest annual community event, the Bushland Shire Festival, is held at Fagan Park every September and is organised by Hornsby Shire Council. Galston hosted the annual Galston Country Music Festival, which was held on a Sunday in early September. 2008 marked the last one that was held. Past performers at the festival included Troy Cassar-Daley, Kasey Chambers, Pat Drummond, The Bushwackers, Smoky Dawson, Normie Rowe, Nicki Gillis and the pop group Bella. Galston Rotary Club which hosted this event, patronised by the legendary Frank Ifield, now stages Opera by the Lake in Fagan Park on the first Sunday in May. The Galston SpringFest (started in 1982/3 by Galston Rotary as the Galston Spring Festival) is also held in early September each year. The Galston Garden Club holds an Open Gardens Weekend each October where several local gardens are open to public view. Galston also hosts the Rotary Scarecrow festival where families and friends gather to create the best scarecrow.

Galston has limited public transport facilities; the main ways to get around the suburb are by walking, driving and cycling. The nearest train station to Galston is Hornsby Station which is an Opal card activated station. The future North West Rail Link will serve Galston, with the nearest station at Castle Hill providing high speed rail travel to the Sydney Central Business District. The major bus operator in Galston is Hills Bus which operates as public transport for the whole of the Hills District. During mornings and afternoons on school days, a lot of buses pass through Galston to serve for Galston High School's large catchment area and Galston Public School as well as traffic from other local schools. Adults are not however allowed to travel on most of these buses as they are school buses except for bus 637 and bus 638 which are public buses.

The Galston Aquatic and Leisure Centre features a 25-metre, six lane indoor heated pool with a squad club. The aquatic centre also features a gymnasium and a learn to swim club as well as many other aquatic activities.

Next door to the Galston Aquatic Centre is the Galston skate park where many skaters ride. The location opposite Galston High School makes it easily accessible for teenage skaters. The Hornsby Shire Council as a result constantly removes vandalism from graffiti attacks around the area at places such as the swimming pool noticeboard and at the buildings on Hayes Oval.

Hayes Oval is the home to the Hills Hawks Soccer team and due to the high usage of the facility coach rooms, a canteen and a spectator area were built. These buildings are situated on the Galston Road side of Hayes Oval. Hayes Oval is used for soccer, softball, cricket and many other sporting activities.

Galston has a very strong and supportive community made up of many small businesses. Galston's community helps local schools, local businesses and supports local events. There are very few commercial businesses in Galston which makes Galston unique as the small businesses all have their own style and their own expertise. Public schools in the Galston region support each other in the Galston Community of Schools. Galston's local Bendigo Bank Community Branch is a main sponsor to the Galston community and supports the region's schools, events and facilities. Bendigo Bank is the only bank in Galston and is one of the very few in the region meaning that many people in the area have a bank account at the Galston Bendigo Bank Branch which helps the community a lot. Galston and Glenorie has its own magazine which is not even from a commercial business but is from a local business Adelphi Design & Print. The council is a key part of Galston as many of the facilities across the town are owned by the Hornsby Shire Council. Some of these include Fagan Park, Galston Library, Galston Community Centre, Galston Aquatic Centre, Galston Recreation Reserve, Hayes Oval and many more.

All content from Kiddle encyclopedia articles (including the article images and facts) can be freely used under Attribution-ShareAlike license, unless stated otherwise. Cite this article:
Galston, New South Wales Facts for Kids. Kiddle Encyclopedia.