Galston (Lowland Scots: Gauston, Scottish Gaelic: Baile nan Gall) is a municipality in East Ayrshire, Scotland which has a population of 5,001 (2001). It is situated in wooded countryside 4 miles up-river from Kilmarnock and is one a group of the small towns located in the Irvine Valley between the towns of Hurlford and Newmilns. To the north of the town is the ruin of Loudoun Castle, the site of Loudoun Castle theme park from 1995 to 2010. In 1874 the population was 4,727.

The name Galston means "place of the strangers" from the Gaelic word Gall (a stranger), and the Toun or Ton was a farm and its outbuildings. The word baile was anglicised in more recent history as toun like many other place names in Scotland which were originally "bal".

The 17th-century Presbyterians were against burials taking place within churches. In 1609 John Schaw of Sornbeg decided to bury his recently-deceased wife within Galston Kirk. He entered the kirk with a party of armed men and proceeded to break up flagstones and dig a grave where he interred his wife's body. He was fined £20 for this action and promised never to attempt this act again. 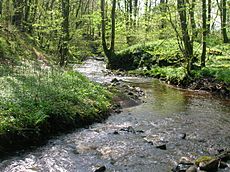 A view of the Burnanne at Bank Wood Bridge.

The burn joins the Irvine at Galston. It is named after St Anne, said to be the mother of the Virgin Mary. St Anne's holy well is marked on the 1860 OS and lies above Bank wood, flowing into the Burnanne. The Holy well has been destroyed by the construction of a concrete tank which collects the spring water for Cessnock Castle, first constructed for the Duke of Portland in Victorian times. The Carsewell Hole nearby was used for adult baptism.

A great danger is the presence of the alien invader, the Pink Purslane or Stewarton Flower which will spread rapidly and destroy the native herbs by out-competing them (2007). It needs to be removed as matter of urgency.

A new (2008) metalled path has been created through part of these woods, greatly improving access. A new wood has been planted along part of the new path and this will in time extend and protect the habitats and the biodiversity of the site.

This tributary of the Irvine was famous for its rich jasper pebbles; semi-precious stones which were collected, cut and polished for use in jewellery.

This station on the Glasgow and South Western Railway line to Stonehouse via Strathaven, closed in 1964. 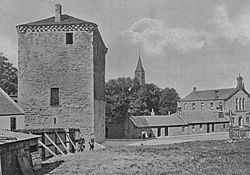 Probably dating from the 15th century, this five-storeyed red sandstone tower castle still stands as a prominent feature (NS 505 360) on a rocky knoll close to the Burn Anne, within the town's boundaries. It was also known as Lockhart's Tower and was built to control the nearby access points up the Irvine Valley.

William Wallace is said to have taken refuge from pursuing English soldiers within the tower, eventually escaping siege by climbing down an overhanging tree.

It has a practical, if not authentic, roof which does not hide a view of the continuous corbelling of the parapet. The bottom section of the four angle towers are discernible.

The castle was built for the Lockart family who held the Barony of Galston; enthusiastic opponents of the Catholic faith. In 1670 the property was purchased by the Campbells of Cessnock Castle nearby. The castle is now used as a Masonic Lodge and is open to the public on occasions. In August 1528, James Campbell of Lochlee abducted Alexander Pawtoun from Mauchline and imprisoned him for 5 days in the dungeon ('spelunca') of the Tower of Galston in order to extort the sum of £20. In an old charter of 12 March 1438, John Lockhart, Lord of Barr, provides for an annual rent to be paid to the chaplain for saying three masses annually for the repose of his soul at the altar of the church of Saint Peter in Ardrossan.

The renowned reformer and Protestant martyr, George Wishart, preached at the castle in 1545 and in 1556 John Knox also preached here; both were under the protection of John Lockart of Barr and his fellow reformers.

This game was popular with farm workers who used clenched hands to hit a hard ball off the side wall of the Barr Castle; like squash without the use of rackets. The court was off earth, beaten hard. Galston became World Champions at this handball sport, however it is no longer played, the last official game being in 1939. Local legend has it that the game was used by William Wallace to help keep his men fit for battle.

Handball was popular in these parts during the 19th century and Galston was the site of the most important competition, held on the Saturday of the Glasgow Fair. It belonged to the group of sports that Gaelic handball still represents. John Galt refers to handball being played in Irvine against the back wall of a malt-kiln. 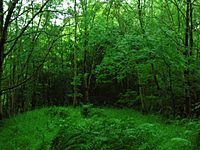 The Judge's Hill near Galston, just visible through the woods.

A justice hill survives in a patch of woodland on the Hag Burn near the Loudoun Country Club. This site may have been linked to the old Barony of Galston and the feudal rights of the Campbells of Loudoun.

The site has a nearby lime kiln and old ruins next to the Hag Burn which may have been a forge.

All content from Kiddle encyclopedia articles (including the article images and facts) can be freely used under Attribution-ShareAlike license, unless stated otherwise. Cite this article:
Galston, East Ayrshire Facts for Kids. Kiddle Encyclopedia.