Kilmarnock (Scottish Gaelic: Cille Mheàrnaig, "Meàrnag's church") is a large burgh in East Ayrshire, Scotland with a population of 46,350, making it the 15th most populated place in Scotland and the second largest town in Ayrshire. The River Irvine runs through its eastern section, and the Kilmarnock Water passes through it, giving rise to the name 'Bank Street'. Kilmarnock is often shortened to 'Killie', especially when it is referenced in a footballing situation. Kilmarnock is the main town within East Ayrshire, and the East Ayrshire HQ is located on London Road in Kilmarnock, leading to the villages Crookedholm and Hurlford, which furthermore leads to Loudoun.

The first collection of work by Scottish poet Robert Burns, Poems, chiefly in the Scottish dialect, was published here in 1786, and became known as the Kilmarnock volume. The internationally distributed whisky brand Johnnie Walker originated in the town in the 19th century. Protest and backing from the Scottish Government took place in 2009, after Diageo, the owner of Johnnie Walker announced plans to close the bottling plant in the town after 289 years.

In recent years, Kilmarnock has been used for musical acts and film locations. Rock band Biffy Clyro were formed in the town in a primary school in the mid-1990s. The 2001 film, Pyaar Ishq Aur Mohabbat (2001) was shot in the town as was Manhunt (2004). 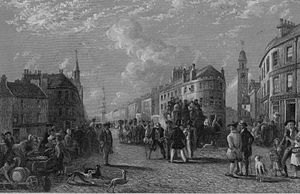 The name Kilmarnock comes from the Gaelic cill (cell), and the name of Saint Marnoch or Mernoc who is also remembered in the name of Portmarnock in Ireland and Inchmarnock. It may come from the three Gaelic elements mo, 'my', Ernán (name of the saint) and the diminutive ag, giving Church of My Little Ernán. According to tradition, the saint founded a church there in the 7th century. There are 12 Church of Scotland congregations in the town, plus other denominations. In 2005, the Reverend David W. Lacy, minister of the town's Henderson Church, was elected Moderator of the General Assembly of the Church of Scotland.

The core of the early town appears to have lain around what is now the Laigh Kirk, Kilmarnock (Low Church), although the oldest parts of the current building are no earlier than the 17th century, extending north and northwest. In 1668 the town was largely destroyed by an accidental fire. About 120 families lost most of their possessions and were forced to live destitute in the fields surrounding the town. These tradespeople had no other way of making a living and had already been driven to the edge of poverty by having troops stationed with them as part of the anti-Covenanter measures. Parish churches throughout Scotland collected money for the relief of these homeless citizens.

A comparatively modest settlement until the Industrial Revolution, Kilmarnock extended considerably from around 1800 onwards, requiring the opening of King Street, Portland Street, and Wellington Street. Added later was John Finnie Street, which is regarded as "one of the finest Victorian planned streets in Scotland." The Sandbed Street Bridge is the oldest known surviving bridge in the area. 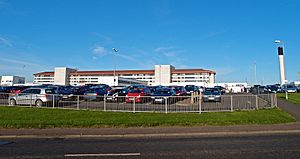 The textile and manufacturing sectors across Scotland suffered significant decline in the post-war period and in particular from the 1960s, in the face of greater foreign competition. Kilmarnock was no exception, with the closure or significant reduction of many of its traditional large employers: Glenfield and Kennedy, Massey Ferguson, BMK and Saxone. Although significant attempts have been made to halt this decline and attract new employers, Kilmarnock saw a continuing net loss of jobs in the five years to 2005. Although traditionally a main shopping area for most of the surrounding districts, patterns have changed over the last 20 years; traditional centres such as Ayr have been joined by new developments at Braehead and East Kilbride. This difficult economic climate is most visible in the town centre, the eastern part of which has been extensively redeveloped, with important historic buildings such as King Street Church and the town hall being demolished and Duke Street (the link from Kilmarnock Cross to the Palace Theatre and out to the London Road) built over.

More recently Portland Street, which formed the northerly part of the main shopping area, lay abandoned for many years due to a decline in retail trade and in the face of possible comprehensive redevelopment. The street has now been redeveloped, but has not yet regained its former degree of popularity, with a Gala Bingo and a J D Wetherspoon's taking up much of one side of the street and the rest largely occupied by chain stores. In 2004, the Rough Guide to Scotland described the town as "shabby and depressed, saddled with some terrible shopping centres and a grim one-way system". The town, however, contains several parks such as Howard Park, Dean Park and Kay Park, and residential areas including London Road, Dundonald Road, McLelland Drive and Howard Park Drive. The town also boasts a collection of gift shops, cafes, bars and restaurants within the very desirable Bank Street area. There are retail parks at Queen's Drive and Glencairn Square. 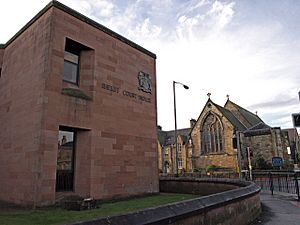 The new Kilmarnock Sheriff Courthouse. The former courthouse is situated across the street which is now used as the Procurator Fiscal office for Kilmarnock

According to the local press in November 2007, the new SNP council have drawn up a Top Ten Hit List on 'eyesore' buildings in the town and their owners, and have revealed plans to crack down hard on property owners who have left their buildings fall into disrepair. Action is being taken to do something with each of these sites. Many of the buildings in disrepair are irreplaceable listed buildings such as the former ABC cinema (previously the King's Theatre) on Titchfield Street. Plans to improve the derelict building at the top of John Finnie Street that was destroyed by a fire in the late 1980s have been submitted to include a council office retaining the original façade. Work is estimated to be completed in 2012. A four-star hotel recently opened next to Rugby Park, the home of Kilmarnock F.C., and new restaurants, such as Merchants and the award winning Jefferson Restaurant, have opened in the town centre.

Regeneration activities have been discussed for Kilmarnock town centre; in early 2006, an application to Historic Scotland's Conservation Area Regeneration Scheme was successful, and in July 2006 an application under the Heritage Lottery Fund's Townscape Heritage Initiative Scheme was pending. Work has finished on a quality housing development on the site of the former Kilmarnock Infirmary, north of the town centre. In the past there have been major efforts to improve the quality of life for residents in the town's worst housing estates, especially in parts of Shortlees, Longpark and Onthank. Much new quality housing has been constructed on the northern fringes of the town for commuters. With a journey time of 20 minutes from Kilmarnock to Glasgow (roughly half that of the existing train service), the M77 motorway, an upgrade in 2005 of the A77, has transformed the journey between Glasgow and Kilmarnock. Recent house price increases have reflected this. 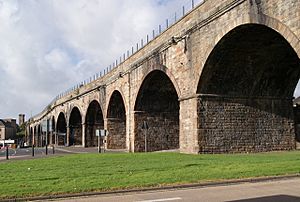 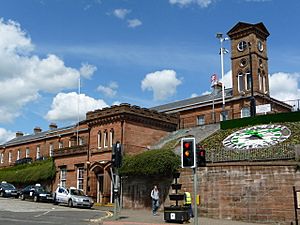 Kilmarnock railway station and its tower. The station clock has since been upgraded

In 1812, the Kilmarnock and Troon Railway opened, mainly to carry coal from the area to the harbour at Troon, but also carrying passengers. In 1904, Kilmarnock built its own tramway system, the Kilmarnock Corporation Tramways. An electric power station was built on the south bank of the River Irvine at Riccarton. Overhead power lines and tram lines were laid. With continued upgrading and expansion, the tram network at its peak went from Ayr Road in Riccarton at its southerly point, to Knockinlaw Road in Beansburn in the north.

At Kilmarnock Cross, the line had an easterly spur that stretched along London Road, through Crookedholm and terminating at Hurlford. There had been proposed extensions along Portland Road, up John Finnie Street, West Langlands Street and eventually towards Crosshouse, but by this time, increasing costs and the far more flexible motor bus had made inroads and the trams ceased operation in 1926 during the General Strike. The council decided not to restart the service and the infrastructure was soon dismantled. Today the town is served by Kilmarnock railway station, which operates services from the town to all major locations in Scotland connecting with Stranraer for the ferries to the Port of Belfast as well as Larne Harbour in Northern Ireland and as far as Carlisle and Newcastle in England.

A recent development has been the regeneration of Kilmarnock Railway Station under the umbrella of the Kilmarnock Railway Station Heritage Trust. Additions to the station facilities include a gift shop, coffee shop and an Active Travel HUB where members of the public can access advice on travelling more sustainability. The HUB also offers a wide range of led walks and cycle rides to members of the public and community groups.

Kilmarnock has excellent road links to Glasgow with the M77 motorway now completed from Fenwick to its junction with the M8 at the Kingston Bridge. A new south side motorway connects this point to the M74 near Calderpark when the latest phase of development is complete, eliminating some of the heavy traffic formerly travelling on the A71 through Hurlford, Galston, Newmilns, Darvel and Strathaven to join the M74 at Stonehouse. Stagecoach Group is the main transport provider in the town; it operates bus services to most major towns in the west of Scotland.

Kilmarnock lies on the intersection of 3 main roads: the A71 which runs from Edinburgh to Irvine, the A76 from Dumfries, and the A77/M77 from Stranraer to Glasgow, showing the significance of its location as an early market town. 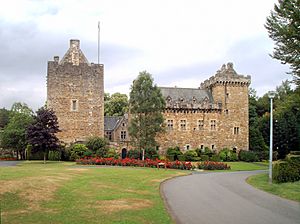 Dean Castle, Kilmarnock. One of Scotland's oldest castles and an A-listed building

Kilmarnock boasts a large number of listed buildings. The Dick Institute, opened in April 1901, was severely damaged by fire only eight years after it opened. Some of the museums collections were lost in the fire. It reopened two years after the fire in 1911. The Dick Institute was used as an Auxiliary Hospital in 1917 during World War One. It is now shared by the Arts and Museums Service, and the Libraries, Registration and Information Service. The two Art Galleries and three Museum Galleries house permanent and temporary displays of Fine Art, Contemporary Art and Craft, Local and Industrial History and Natural Sciences. The Lending Library, Audio Library, Junior Library, Reference Library, and Learning Centre are all housed on the ground floor.

The first collection of work by Scottish poet Robert Burns, Poems, chiefly in Scots was published here in 1786. It was published at the current site of the Burn's Mall, dedicated to his work. This edition is known as the Kilmarnock Edition or Kilmarnock volume. The ancestors of William Wallace held the Barony of Ricarton, where the suburb of Riccarton is now located, and, according to local tradition, Wallace was born at Ellerslie near Kilmarnock.

John Bowring, polyglot and fourth governor of Hong Kong, was Member of Parliament for Kilmarnock in 1835. In the castle of Kilmarnock, Dean Castle, there is an exhibition of armour and weapons, and the Van Raalte collection of musical instruments. 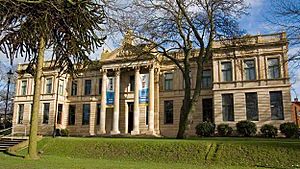 Dick Institute, currently used as a library and museum. During World War I, the building was used as a hospital for injured soldiers

Scottish singers The Proclaimers titled a song "The Joyful Kilmarnock Blues" on their first album, This Is the Story, released in 1987.

In The Railway Series, Duncan, Engine Number 6 of the Skarloey Railway was built by Andrew Barclay Sons & Co., which is located in Kilmarnock.

Kilmarnock – as part of East Ayrshire Council – is twinned with five cites and has received awards from the Council of Europe for its work in twinning. Alès, France; Herstal, Belgium; Joué-lès-Tours, France; Kulmbach, Germany; and Santa Coloma de Gramenet, Spain. Kilmarnock, Virginia, US.

The former Kilmarnock and Loudoun District Council is also twinned with Sukhum, Republic of Abkhazia, on the Black Sea coast.

Following a review of links this link is now considered as a friendship link.

All content from Kiddle encyclopedia articles (including the article images and facts) can be freely used under Attribution-ShareAlike license, unless stated otherwise. Cite this article:
Kilmarnock Facts for Kids. Kiddle Encyclopedia.