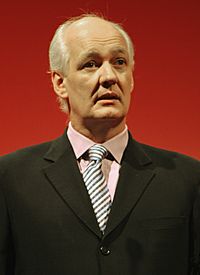 Colin Andrew Mochrie ( born November 30, 1957) is a Scottish-Canadian actor, comedian and writer. He is best known for his work as a regular on both the British and American versions of the improvisational comedy television show Whose Line Is It Anyway?.

Mochrie was born in Kilmarnock, Scotland. In 1964, he moved with his family to Canada. He first moved to Montreal, Quebec and finally Vancouver, British Columbia.

All content from Kiddle encyclopedia articles (including the article images and facts) can be freely used under Attribution-ShareAlike license, unless stated otherwise. Cite this article:
Colin Mochrie Facts for Kids. Kiddle Encyclopedia.