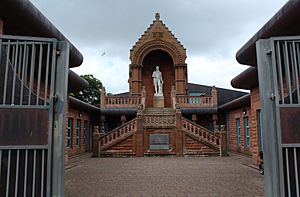 The Burns Monument in Kay Park, Kilmarnock, Scotland, commemorates the poet Robert Burns (1759–1796). It is located at an elevated position within Kay Park, to the east of Kilmarnock Town Centre. The monument was opened in 1879, and is a category B listed building. In 2004 a fire destroyed part of the monument. The building was restored and extended as a genealogy centre, reopening as the Burns Monument Centre in 2009.

Kilmarnock has many links with Burns; the first edition of his work was printed here in 1786, by John Wilson, a local printer. Of this first edition only 612 copies were printed, and copies of this rare book are now known as Kilmarnock Editions. 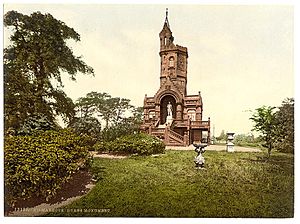 The original monument, circa 1900

On Burns Night 1877, a movement to erect a memorial in Kilmarnock was begun. Subscriptions came in so quickly that the organisers decided to investigate the possibility of a memorial building as well as a marble statue. In October, a design by local architect Robert S Ingram was accepted by the committee, and he began the preparation of drawings. In December, a design competition for the statue attracted 21 entries, and William Grant Stevenson of Edinburgh was judged the winner. The foundation stone was laid on 14 September 1878, by R. W. Cochran-Patrick of Woodside, Depute Provincial Grand Master for Ayrshire.

In August 1879, the 40 acres (16 ha) Kay Park was opened, with the completed Burns Monument as its focus. The statue was officially unveiled by Colonel Charles Alexander of Ballochmyle MP on 9 August. The monument cost around £1,500, with another £800 spent on the statue.

The design of the monument has been described as "an eclectic fusion of Scots Baronial, neo-Gothic and Italianate, with a dash of Baroque and a hint of Romanesque." The original building comprised a two-storey T-plan museum, topped by an 80 feet (24 m) high octagonal tower and spire, with the life-size white marble statue of Burns by Stevenson in a porch at the front. The tower offered wide views across Kilmarnock. Ingram, a prolific local architect, considered the monument to be his finest work.

All content from Kiddle encyclopedia articles (including the article images and facts) can be freely used under Attribution-ShareAlike license, unless stated otherwise. Cite this article:
Burns Monument, Kilmarnock Facts for Kids. Kiddle Encyclopedia.