Darvel or Dervel (Scots: Dairvel, Scottish Gaelic: Darbhail) is a small town in East Ayrshire, Scotland. It is at the eastern end of the Irvine Valley and is sometimes referred to as "The Lang Toon" (English: the Long Town).

The town's Latin motto, Non sibi sed cunctis, means "Not for ourselves, but for others".

Darvel is situated on the A71 road that runs from Irvine on the west coast to Edinburgh on the east. The town is nine miles east of Kilmarnock and is the most easterly of the Valley Towns, the others being Galston and Newmilns.

The town was also once linked with Stonehouse (via Strathaven) by the Caledonian Railway. However, the line was closed by the LMS before the Second World War. The former Glasgow and South Western Railway branch line to Kilmarnock survived for much longer and was closed in 1964 as part of the Beeching Axe. Much of the route of both the old railway lines is still in existence, although the rails have long since gone and many road bridges have been removed. There was a large viaduct to the east of the town, in the lea of Loudoun Hill, which carried the railway line over the valley. This was however, demolished in 1986, and only the piers remain.

The River Irvine flows through the town and once powered local mills.

A view of the Glen Water at Law Bridge in Darvel

Although the modern town of Darvel is said to have been established in the late 18th century, Roman settlements have been found at the base of Loudoun Hill on Allanton Plain and visible at one point from the Winny Wizzen. The name Darvel was recorded in old charters as variations of 'Dernvale' or 'Darnevaill' and may derive from an old English word 'derne' which means 'hidden.'

Sir William Wallace, the Scottish freedom fighter, has also been associated with the area. 15th century minstrel Blind Harry wrote in his poem The Wallace that Wallace and his men defeated an English force at the hill in 1296 during the Wars of Scottish Independence. Blind Harry also tells of how the English general, Fenwick, who supposedly killed Wallace's father, was killed during the battle. Maps of the area now name a mound to the east of Loudoun Hill as 'Wallace's Grave'. A battle between Robert the Bruce and the English was also fought there on 10 May 1307.

The land on which Darvel was built was owned by Earls of Loudoun and it was John Campbell, 4th Earl of Loudoun who began the modern town in 1754 as an income for the estate. By 1780, the population had increased to over 400. Loch Gate or Gait was once a significant loch close to the farm of that name, however it was largely drained for agriculture in the 19th century.

In 1876, the art of lace-making was introduced to the town and many mills were built to keep up with the demand. Market dried up in the 20th century and many factories were forced to close.

The Law Bridge over the Glen Water near Darvel, 2007

Also of note in the town is Scotland's only 24-hour telephone museum, run by retired engineer Max Flemmich. There are two local football teams. Darvel F.C., a junior (semi-professional) team, based at Recreation Park, play in the Ayrshire Junior League and Darvel Victoria, the local amateur team, who play their games at the Gavin Hamilton Sports Centre.

There is a Town Hall, a Sports Centre (Gavin Hamilton Sports Centre), and two play-parks (Kirkland Park and Morton Park). A Gala Day is held every two years, which attracts many visitors, as do the various festivals in the town. There are a few pubs in Darvel - 'The Horseshoe', 'The Black Bull' and 'The Railway Inn'. Until 2006 there was also The Turf Hotel, but it has now closed.

War Memorial
The Darvel War Memorial is situated in Hastings Square in the centre of the town. It is a light grey granite obelisk with a square base. The East side is plain apart from 1914-18 incised on the base. The west side is similar but with 1939-45 incised on the base. The north side has a carved cross at the highest point with a bronze relief laurel wreath immediately below. Towards the base of the obelisk are the words:

To the memory of
Those who gave themselves
A living sacrifice

Then there are 5 columns of names in relief on a bronze plaque and, on the south side, names are etched into the stone in two columns.

Alexander Fleming
A memorial at Lochfield farm commemorates the birth there, on 6 August 1881, of Alexander Fleming, discoverer of penicillin. It was erected in 1957 and regilded in 2009 by its current owners Philip and Heather Scott. The restored memorial was unveiled by Fleming's biographer Kevin Brown in the presence of Provost Stephanie Young. Another memorial with a bust by E.R. Bevan and a garden is situated in Hastings Square.
SAS Memorial
There is a memorial to honour the men and officers of the 1st Special Air Service (SAS) Regiment who, under the command of Lt. Col. R. B. Mayne, were stationed in Darvel during the early part of 1944. The memorial – located towards the bottom of Burn Road, takes the form of a stone cairn with a black granite plaque bearing the inscription:

The memorial was unveiled by Provost Jimmy Boyd on 2 November 2001. Members of the SAS were at the Town Green to see the unveiling ceremony.

The RCHAMS website lists this unhewn olivine monolith as a 'possible' standing stone, about 1.6m tall. It is rather curious and its general size and shape suggest a prehistoric standing stone. It has twelve small connected depressions spread over three of its sides. These have been said to link the stone to astronomical observations and to the noon-day sun height at mid-summer. This would link the stone to life-giving powers, fertility and prosperity.

In 1821 a local blacksmith attached a round sandstone ball to the top of it with an iron bar. Who or why is unknown.

Although its original location is unknown, John Woodburn’s A History of Darvel (published 1967) noted that the Dagon Stone has stood in at least four different places in the town since the 19th century. The reason for each relocation is unknown, but the stone has been a fixture within Darvel for at least 200 years.

The Dagon Stone was initially recorded as being located on East Main Street, at the junction with Ranoldcoup Road, where it is shown on 19th century maps. The main road was widened in 1894, so the stone was moved to the ‘grounds of Brown’s Institute’, located at the corner of Ranaldcoup Road and Mair's Road, and adjacent to Morton Park. In 1938 it was re-sited in the small park in Burn Road at the junction with West Main Street, near the spot where the SAS Memorial now stands. Finally, the stone was moved to its current location in Hastings Square in 1961 or 1962. 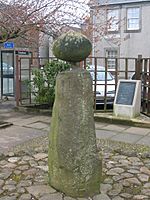 Documentation shows that prior to the 19th century messings-about, newlywed couples and their wedding parties marched around it for good luck, accompanied by a fiddler. Wedding processions also used to walk three times sunwise round the Dagon stone on the way to the bride's house.

The annual parade or "Prawd", originally held on old New Year's Day, headed by the village band used to walk sunwise round the Dagon stone as a mark of superstitious respect.

Dagon is also the name of a Philistine god, who was half-man half-fish. But with a Scottish accent it no doubt derives from something much closer to home (assuming it is not just the romantic invention of a Victorian antiquary); 'dogon' is a Scots term for a worthless person, a villain and this could by association have been one of the sanctuary stones associated with the church. It is reminiscent of the Clackmannan stone or Stone of Mannau in Clackmannanshire.

In 1876 lace making was introduced to the Irvine Valley by Alexander Morton, and mills began to spring up in Darvel and nearby Newmilns. The valley's products were exported throughout the world, with India providing a particularly large market for lace, muslin and madras. Darvel became known as the "Lace Town" and Darvel Lace was known throughout the world.

Factories in the town also diversified into other textiles, until the late 1970s, when the industry struggled to compete with textiles manufactured in India, China and other Far East countries. The decline was swift. By the end of the 20th century, almost all the factories had closed. Many stood empty for some years, but almost all have now been demolished to make way for housing estates.

Lace is still made in the Irvine Valley, and locally made lace curtains used to hang in almost every window in the town. However, the last lace factory in Darvel has now closed, the looms were moved to nearby Newmilns, which is home to the last remaining lace factory in the area.

A speedway training track was built by local farmers (the Craig Brothers) on a coal bing (colliery spoil heap) near to the town in the early 1980s. A team representing Darvel raced in the Scottish Junior League with fixtures staged at Blantyre, Edinburgh and Berwick. Darvel has a football team at Junior level, and an amateur team also, Darvel Victoria.

All content from Kiddle encyclopedia articles (including the article images and facts) can be freely used under Attribution-ShareAlike license, unless stated otherwise. Cite this article:
Darvel Facts for Kids. Kiddle Encyclopedia.