Beecroft is a suburb in the Northern Sydney region of Sydney, in the state of New South Wales, Australia 22 kilometres north-west of the Sydney central business district in the local government areas of Hornsby Shire and City of Parramatta. 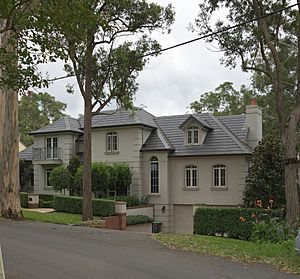 Beecroft resides the upper section of Lane Cove National Park, and is one of the oldest established suburbs in New South Wales. The suburb is notably affluent, and is characterised by leafy streets and large federation homes on big blocks of land. With a median house price of $2,350,000, Beecroft is higher than New South Wales' median house price of $820,000, establishing the value of property within this Upper North Shore suburb.

Beecroft was orchard country before its suburban development. The railway arrived in 1886 and Sir Henry Copeland, Minister of Lands, conducted a survey of the area to determine its suitability as a residential area. He named the suburb after the maiden name of his two wives, Hannah and Mary Beecroft, (two sisters he married in succession). Their names are also remembered through the respective naming of the suburb's east-west streets; Hannah Street, Copeland Road and Mary Street. Beecroft Post Office opened on 10 February 1890. Due to the strength of the temperance movement in Beecroft at that time there have never been any hotels in Beecroft. The bushland and amenity of Beecroft has been largely preserved due to the efforts of the Beecroft Cheltenham Civic Trust which has been very active since its inception in 1958. 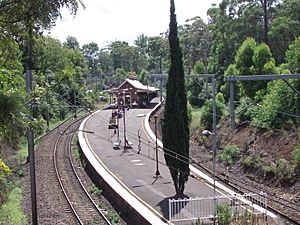 Beecroft railway station is on the Main Northern railway line. In addition to passenger railway traffic, the Main Northern Line also acts as an intercity and freight train thoroughfare passing through Beecroft. Beecroft is also serviced by various bus routes including route 553 operated by Busways and routes 651 and 635 operated by Hillsbus.

Prior to the construction of the M2 Hills Motorway, Beecroft's main road thoroughfare was commissioned as part of Sydney's Metroad system of major arterial roads and throughways. Beecroft Road was part of the Metroad 2 thoroughfare which took motorists between Sydney's Central Business District and Windsor via the Sydney Harbour Bridge, Epping and Castle Hill.

A walking track in the part of Chilworth Reserve known as "Byles Bush", at the end of York Street.

Beecroft has a number of recreational facilities within its boundaries. Beecroft is home to Pennant Hills Golf Club, a lawn bowls club now known as "The Beecroft Club" (previously "Beecroft Bowling and Recreation Club"), a lawn tennis club, as well as general park space at the Village Green, walking trails through Chilworth Reserve and other forested areas.

Beecroft has four Primary Schools, an independent Anglican school and a high school on the border of Carlingford:

All content from Kiddle encyclopedia articles (including the article images and facts) can be freely used under Attribution-ShareAlike license, unless stated otherwise. Cite this article:
Beecroft, New South Wales Facts for Kids. Kiddle Encyclopedia.