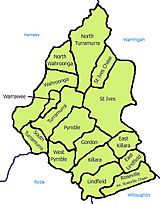 South Turramurra is a suburb on the Upper North Shore of Sydney in the state of New South Wales, Australia 18 kilometres (11 mi) north-west of the Sydney central business district, in the local government area of Ku-ring-gai Council. Turramurra and North Turramurra are separate suburbs.

Turramurra is an Aboriginal word which is thought to mean either big hill, high place, or small watercourse. Early settlers referred to the area as Eastern Road until the name Turramurra was adopted when the railway station was built in 1897.

During the early 1990s a community organisation (Coalition Against Lane Cove Valley Freeways) was formed to oppose plans for the construction of the B2/B3 extension, designed to connect the M2 motorway in North Epping with the Pacific Highway.

South Turramurra became a separate suburb from Turramurra on 5 August 1994.

At the 2011 census, the suburb of South Turramurra recorded a population of 2,974 people. Census data shows that:

South Turramurra's Age distribution reflects the popularity of the suburb with families and retirees. The median age was 40 years, compared to the national median of 37 years. Children aged under 15 years made up 24.7% of the population (national average is 19.3%) and people aged 65 years and over made up 17.2% of the population (national average is 14.0%).
Ethnic diversity : 67.4% were born in Australia, compared to the national average of 70%; the next most common countries of birth were England 6.4%, New Zealand 2.7%, Korea 1.7%, South Africa 1.7% and India 1.7%. At home, 81.4% of residents only spoke English; the next most common languages spoken at home were Cantonese 2.3%, Korean 2.2%, Mandarin 1.4%, Persian (excluding Dari) 1.1% and Hindi 1.1%.
Finances: South Turramurra is a wealthy suburb. The median household weekly income was $2,343, compared to the national median of $1,234. This difference is also reflected in real estate, with the median mortgage payment being $2,838 per month, compared to the national median of $1,800.
Transport: On the day of the Census, 20.0% of employed people traveled to work on public transport and 56.6% by car (either as driver or as passenger).
Housing: The great majority (99.3%) of occupied private dwellings were separate houses, 0.4% were flats, units or apartments and 0.3% were semi-detached. The average household size was 3.0 people.

The Comenarra Parkway, a minor arterial road consisting of only one lane in each direction, creates a boundary with Turramurra, to the north.

South Turramurra is surrounded on the other three sides by the Lane Cove National Park.

The strong community support for the anti-freeway campaigners resulted in the protection of the bushland at the foot of the suburb of South Turramurra as part of the Lane Cove River National Park. Many different and diverse action groups were formed (and still remain) in order to effectively lobby government. The environmental community group STEP Inc, which was formed in South Turramurra in 1978 has grown to be a powerful force for the environment in northern Sydney.

1st Turramurra Scout Group is one of the oldest and strongest Scout Groups on the north side, with active programs for boys and girls aged from 8–11 Cub Scouts, 11–15 Scouts through to young men and women 15–17 Venturer Scouts and 18–25 Rovers.

Turramurra and Kissing Point Rover Crews, both based on the south side of Turramurra, are active groups of young people aged 18~25, who are into a wide range of outdoor, social and community service activities.

There are also a number of Churches and various religious temples in South Turramurra, some having youth groups for children aged 5 - 18 years old.

All content from Kiddle encyclopedia articles (including the article images and facts) can be freely used under Attribution-ShareAlike license, unless stated otherwise. Cite this article:
South Turramurra Facts for Kids. Kiddle Encyclopedia.