The valley has been shaped by the Ponds Creek, around which many of the area's parks are located. The valley is bounded by both steep and gentle slopes feeding into the creek. The Ponds walk is a marked 6.6 kilometre track which follows the Ponds and Subiaco Creeks from Eric Mobbs Memorial Park in Carlingford to Jim Crowgey Reserve in Rydalmere. This walk follows a number of the parks in the Dundas Valley area.

Dundas and surrounding areas were originally known as "The Ponds", a name still reflected in The Ponds Creek. The first private land grants in Sydney made in 1791 were in what is now North East Dundas and adjoining Dundas Valley and Ermington. This consisted of land grants to 14 former convicts and their families along the Ponds and Subiaco Creeks.
The city of Parramatta has erected signs in the suburb documenting the initial land grants in the area. One subsequent grant was the 30 acre Lot 108 to John Love, a member of the NSW Corps, on 20 February 1794.

The name Dundas was first used in the area in 1799, taken from a parish of the same name in England, although it is also claimed the area was initially named after Henry Dundas, 1st Viscount Melville.

The area was developed during the 1950s and 1960s with the construction of public housing.

Dundas Valley was formally declared a suburb on 19 October 2007.

Thomas Mitchell opened a quarry in 1832 on the site of the park that now bears his name. The quarry was a supplier of ‘blue metal’, used in road construction, into the 20th century. The 'blue metal' was quarried by convicts and carried to Ermington Wharf where it was ferried to Sydney.
The quarry exposed a large volcanic formation between 200 and 250 million years old. Due to the geological significance of the area, it was visited by a number of famous scientists, including Charles Darwin and Douglas Mawson.

A number of streets in Dundas Valley are named after ships of the First Fleet (Sirius, Supply, Alexander, Charlotte and Friendship) and the Second Fleet (Neptune).

At the 2011 census, there were 4,628 residents in Dundas Valley. Just over half of residents were born in Australia (55.7%). The most common other countries of birth were China 9.5%, Korea, Republic of (South) 5.6% and England 2.4%. In Dundas Valley 55.5% of people only spoke English at home. Other languages spoken at home included Mandarin 8.6%, Korean 7.2%, Cantonese 6.2%, Arabic 4.1% and Armenian 1.4%. The major industries of emolyoment were Hospitals 4.1%, Cafes, Restaurants and Takeaway Food Services 3.6%, Building Cleaning, Pest Control and Gardening Services 3.5%, School Education 3.4% and Computer System Design and Related Services 2.6%. 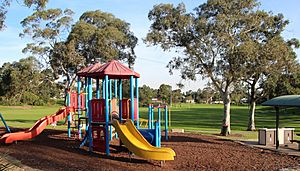 Dundas Park playground, BBQ and ovals in the background

The Philip Ruddock water park is popular with children in the summer months. Dundas Rugby Union Club and The Viking Club on Quarry Road are registered clubs, the latter run by Parramatta Leagues Club.
The Dundas United Recreation Club, based at Curtis Oval, fields teams in cricket, football (Soccer) and netball catering for players aged from Under 6 to adult (including Over 35 football).

All content from Kiddle encyclopedia articles (including the article images and facts) can be freely used under Attribution-ShareAlike license, unless stated otherwise. Cite this article:
Dundas Valley, New South Wales Facts for Kids. Kiddle Encyclopedia.