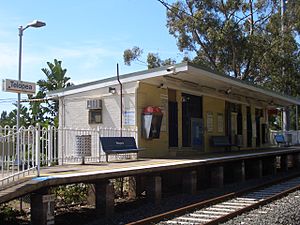 Telopea is a suburb of Greater Western Sydney, in the state of New South Wales, Australia. Telopea is located 23 kilometres north-west of the Sydney central business district, in the local government area of the City of Parramatta. The suburb is bordered by Kissing Point Road to the south and Pennant Hills Road to the north.

Telopea is named from Telopea speciosissima, the New South Wales waratah, a plant that was abundant in the area before it was colonised and which became the floral emblem of New South Wales.

The area is serviced by Busways bus route 545

Telopea contains a large tract of bushland on its western edge, backing onto the Oatlands golf course. The bushland, the Vineyard Creek Reserve as it is known contains a spring-fed creek and has several waterfalls on its course before it disappears beneath Kissing Point road to the south. The creek and the bushland are protected as environmental areas.

Local facilities include a primary school, an alternative educational facility, a library, community hall and a community garden.

All content from Kiddle encyclopedia articles (including the article images and facts) can be freely used under Attribution-ShareAlike license, unless stated otherwise. Cite this article:
Telopea, New South Wales Facts for Kids. Kiddle Encyclopedia.