Denistone is a suburb in Northern Sydney, in the state of New South Wales, Australia. Denistone is located 16 kilometres north-west of the Sydney central business district in the local government area of the City of Ryde. Denistone West and Denistone East are separate suburbs.

Denistone is derived from the name of a home built in the area called Dennistone.

The Wallumedegal Aboriginal tribe lived in the area between the Lane Cove River and Parramatta River, which was known as Walumetta. Gregory Blaxland, a free settler, purchased the 450-acre (1.8 km2) Brush Farm estate in 1806, shortly after his arrival in the colony. This estate covered most of the area south from Terry Road to Victoria Road and Tramway Street, and east from Brush Road to Shaftsbury Road. In 1829 Blaxland transferred Brush Farm Estate to his eldest daughter, Elizabeth, and her husband Dr Thomas Forster. Forster expanded the estate by purchasing the Porteous Mount grants of 120 acres (0.5 km2) on the Denistone ridge in 1830. Denistone was named after Forster's home "Dennistone", burnt down by bushfires in 1855. Richard Rouse Terry acquired the land from the Blaxlands in 1872 where he rebuilt Denistone House, now within the grounds of Ryde Hospital. The Denistone estate, centered on Denistone House, was a late subdivision, not opened up for sale until 1913. Another historic house in Denistone is The Hermitage which was built by Gregory Blaxland's son, John Blaxland in about 1842.

Denistone railway station is on the Main Northern railway line of the Sydney Trains network. Denistone is predominantly residential, free of an expedient commercial hub. Its centre is considered to be the railway station, which was built in 1937, extending to Darvall Park. 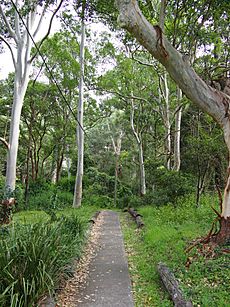 A walkway leading into Darvall Park

Arthur Beetson, renown as one of the greatest Australian Rugby league players of all time used to live in Denistone.

All content from Kiddle encyclopedia articles (including the article images and facts) can be freely used under Attribution-ShareAlike license, unless stated otherwise. Cite this article:
Denistone, New South Wales Facts for Kids. Kiddle Encyclopedia.