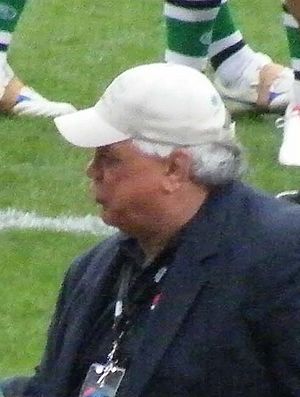 Arthur Henry "Artie" Beetson OAM (22 January 1945 – 1 December 2011) was an Australian rugby league player and coach. He played between the 1960s and 1981. He was known for playing for Easts and captaining Australia. He also played for Queensland and the Parramatta Eels. He was the first Indigenous Australian to captain his country in any sport.

Beetson was born in Roma, Queensland. His mother was a member of the Stolen Generation.

Beetson died from a heart attack on 1 December 2011 on the Gold Coast, Queensland. He was 66.

All content from Kiddle encyclopedia articles (including the article images and facts) can be freely used under Attribution-ShareAlike license, unless stated otherwise. Cite this article:
Arthur Beetson Facts for Kids. Kiddle Encyclopedia.