The Epping to Chatswood rail link (ECRL) (originally a part of the Parramatta Rail Link (PRL)) is a railway line in the northern suburbs of Sydney, Australia, which connects the suburb of Epping on the Northern line to the suburb of Chatswood on the North Shore line.

The 13 km line is completely underground and includes three new intermediate stations: North Ryde (known as Delhi Road during much of the planning process), Macquarie Park and Macquarie University. The junction stations at Epping and Chatswood both underwent major redevelopments to incorporate the new link.

There have been proposals for a railway between Sydney's North Shore and the Main Northern Line since September 1920, when John Bradfield's plans were put forward for a railway between St Leonards and Eastwood. The proposed route was via the present Parklands Avenue in Lane Cove to the head of Burns Bay, across the Lane Cove River near the present-day public school at North Ryde, and terminated about 20 chains (400 m) north of Eastwood Station. After political moves, and potential engineering difficulties with hills south of Eastwood station in the 1930s, the terminus was changed to Epping, where the line became known as the "Epping-St Leonards Railway". To this end, the State Government resumed several of the estate houses in Epping around the present-day Brigg and Albuera Roads for a track to loop the line into the main line and terminate the trains at Epping. When voters in neighbouring Eastwood then complained, the line was proposed to link south of Eastwood, use island platforms at Eastwood and then link to Epping.

In 1929, local real estate agents promoted land sales along the railway line at Epping in preparation for the construction of the line. They called the area "Epping Junction", on account of the station being a junction between the Epping-St Leonards Line and the Main Northern Line. A new island platform was also built in preparation for the terminus of the new line. The track was to be in the middle of the two Main Northern Line platforms, and until the 1970s still existed as a terminating line.

The effects of the Great Depression, however, soon meant that the line would not be economically feasible, and despite protests by local residents and the local member, Major Shand, the project was abandoned. In its place, a road was built between St Leonards and Epping, which is the current Epping Road. The land sales were a complete failure, and the lots around the railway were not sold until the 1950s and 1960s.

It was not until the 1990s that plans for the line were resurrected. An original proposal to run from Westmead to St Leonards, via Epping was considered, but in 1998 the Parramatta Rail Link was announced as part of the NSW Government's Action for Transport 2010 plan. The line was to run from Chatswood through Epping to Parramatta, partially travelling along the underutilised Carlingford surface line which would be expanded from single-track to dual-track. This proposal included optional stations at Delhi Road and UTS Kuring-gai and would be served by eight services an hour. Construction was planned to commence in late 1999, with the line to open in 2006. 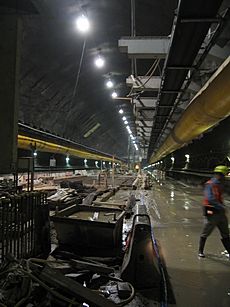 Construction of the PRL began with the Chatswood to Epping section, which commenced in November 2002.

In August 2003 the NSW Transport Minister, Michael Costa, announced that the Epping-Parramatta section would be postponed indefinitely. The delaying of this section was justified on the grounds that the expected daily patronage of 15,000 passenger trips did not justify the project's $1.2 billion cost. The government feared that the line would be under-utilised, much as the Airport Link (a public-private project) has been. There also had been community protest against the routing of the line through Parramatta Park (one of three possible routes supplied by the government). The government later announced the construction of a passing loop on the Carlingford line, which would have allowed a half-hourly frequency all day, however this project was cancelled in November 2008. 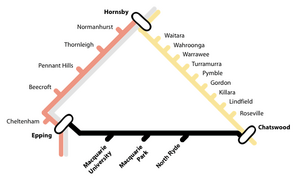 Diagram of Epping to Chatswood Line, in black.

Originally, there was to be a bridge over the Lane Cove River, instead of a tunnel beneath it, but the government adopted the tunnel option due to community and environmentalist pressure. This required the elimination of the planned station at the University of Technology, Sydney, Kuring-gai Campus; the required increased depth of the tunnel to go under the river made a station at that point impractical, due to the required depth of the escalator shafts.

Thiess and Hochtief delivered the project as a joint venture which included the design and construction of a driven railway and four fully mined stations. The line consists of two tunnels – one for each track. The tunnels were constructed using two tunnel boring machines, with a section underneath the Lane Cove River being constructed by the cut and cover method (next to where Delhi Road crosses the River). The line is fully bi-directional, with three crossovers to allow trains to switch tracks in the event of a disruption. The tunnels include a walkway on one side, at platform height.

Several associated works were also completed to coincide with the opening of the new line. These include the rebuilt Chatswood interchange, a major upgrade at Epping, an upgrade of North Sydney station, the Hornsby turnback Rail Clearways project and new substations at Waverton & Beecroft.

In December 2007 it was announced that Tangara trains would not be running on the line due to steepness of the tunnel. The line owner, RailCorp, has denied that this is an engineering bungle, saying "The Tangara trains, because they are not ideally suited to that steep gradient, will not be allocated to that line even though they can operate." S sets trains were also excluded. In February 2008 it was revealed that mats, connected to the rail tracks and concrete slabs to reduce noise, have separated and needed to be replaced, with at least half of the 14 km of track to be re-laid. On 23 October 2008 it was also confirmed during testing that sound levels on the train were 90 decibels, as loud as a 737 plane coming into land. Plans to rectify this would come at a cost that has already blown out from $1.4bn to $2.3bn. In July 2009 it was reported that drivers were being restricted to two return shuttle runs through the tunnel before taking a break as well being instructed to keep the lights on in the driver's cabin and lower the side window blinds in order to avoid a possible stroboscopic effect caused by the tunnel lighting, with claims it may have caused headaches, dizziness, fatigue and nausea. 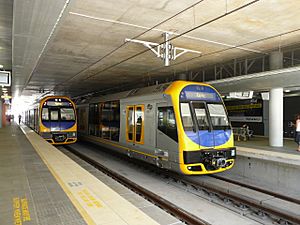 Oscars on the shuttle service at Chatswood.

The line opened on 23 February 2009 as a shuttle service between Epping and Chatswood. The launch was moved from 22 February due to a National Day of Mourning for the victims of Victoria's Black Saturday bushfires. The line operated free of charge until 8 June 2009. Initially passengers could use a blue Complementary Pass, or buy a ticket to either Chatswood or Epping if coming from outside the new link. Later on, the automatic gates at the new stations were switched on and passengers were required to "buy" a ticket as usual. A portion of the fare was automatically deducted for passengers travelling to or from stations beyond the new link.

OSCARS (Outer Suburban Cars), were used on the shuttle service, running as four-car sets. These were the newest trains in the fleet and are intended for longer journeys out of the Sydney basin, but were used on the ECRL due to the steepness and noisiness of the tunnel. Other types maintained at Hornsby Maintenance Depot were not used during the shuttle phase, though tests with K sets proved successful. Trains operated at 15 minute intervals, with the last service departing Epping at 9.31pm The line was coloured black on CityRail maps and publicity materials during the shuttle period, which ended on 11 October 2009 when a new timetable was introduced.

In February 2010 the NSW Government re-announced the North West Rail Link as a conventional mainline railway, connected with the ECRL at Epping.

On 11 August 2010, Prime Minister Julia Gillard announced $2.1bn in funding for the Epping to Parramatta Rail Link with $520m to be contributed by the NSW Government. (a revisit of the 1998 NSW Government announcement, which despite a detailed report in 2003 was abandoned earlier in 2010 by the NSW Kristina Keneally Government). Work on the line was expected to begin in 2011 and the line was scheduled to be operational by 2017. The state opposition indicated it wished to instead use the federal money to construct the North West Rail Link, should it win the March 2011 state election. The federal government did not support this proposal and said the money should be used to construct the line to Parramatta as it originally proposed. Following the defeat of the Keneally Government in 2011, the proposal was abandoned.

The new O'Farrell Government continued planning for the North West Rail Link. During the planning process, it was announced that the project would be switched from a mainline railway to a metro rapid transit service. The North West Rail Link will still connect to the Epping to Chatswood line, forming the Sydney Metro Northwest - the first stage of the Sydney Metro. The NSW Government is planning to replace through services with a shuttle service, for a period of four months. The conversion of the ECRL to metro standards will follow, taking around seven months, during which time the line will be closed. Operation of the Sydney Metro Northwest line is expected to commence in 2019.

During that, the integrated Northern line route from Hornsby to Central via Strathfield will be reinstated with expanded train services on the North Shore line with trains services between Hornsby and Chatswood only operating via Gordon on the T1 North Shore, as part of the major timetable changes commencing in 2018.

All content from Kiddle encyclopedia articles (including the article images and facts) can be freely used under Attribution-ShareAlike license, unless stated otherwise. Cite this article:
Epping to Chatswood rail link Facts for Kids. Kiddle Encyclopedia.