Rouse Hill is a suburb of Sydney, in the state of New South Wales, Australia. Rouse Hill is located in the Hills District, 43 kilometres north-west of the Sydney central business district and 19 kilometres north-west of the Parramatta central business district. It is in the local government areas of The Hills Shire and City of Blacktown. Rouse Hill Town Centre is at the heart of the suburb, which contains a busy Town Square.

Rouse Hill encompasses what was originally known as the Village of Aberdour along with the area originally known as Vinegar Hill following the convict rebellion of 1804. Vinegar Hill Post Office opened on 1 October 1857 and was renamed Rouse Hill on 13 April 1858. The new name was chosen after the estate of Richard Rouse (1774-1852), a prominent free settler who arrived in the colony in 1801. His first grant here was in 1802 and his second grant was in 1816. Governor Lachlan Macquarie suggested the estate be called Rouse Hill. 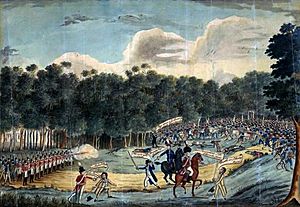 Rouse Hill is noteworthy in Australian history as the site of the main battle during an Irish rebellion, known as the Castle Hill rebellion or the second Battle of Vinegar Hill. On 4 March 1804, Irish convicts including political prisoners transported for participating in the Irish Rebellion of 1798, broke out of the Government Farm at Castle Hill, aiming to seize control of the area and to capture Parramatta. The uprising was crushed by the military authorities at Rouse Hill the following day with much loss of life. Many of the participants in the rebellion were summarily executed. The exact site of the Battle is uncertain but a monument with a plaque commemorating the event can be seen within Castlebrook Lawn Cemetery on Windsor Road in Kellyville Ridge. 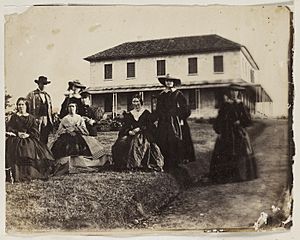 Richard Rouse built his home, Rouse Hill House, from 1813-18. Service wings and an arcaded courtyard were added circa 1863. The simple, geometric layout of the garden is probably the oldest surviving in Australia. The house, its immediate surviving estate and outbuildings including stables designed by John Horbury Hunt, is now a house museum cared for by the Historic Houses Trust of New South Wales, and is on the Register of the National Estate.

Much of the family memorabilia has been preserved, including dolls, clothes and writings of the two girls, Nina (1875-1968) and Kathleen Rouse (1878-1932). These form a unique and fascinating record of late-Victorian Australian childhood, and inspired Ursula Dubosarsky's prize-winning novel "Abyssinia".

Rouse Hill is bisected by Windsor Road, which is now a major 4-lane road running from North Parramatta north-west to Windsor. Most residents of Rouse Hill are reliant on private cars for transport, with a high number of households having two or more cars.

The North West Rail Link is a proposed railway line running from Rouse Hill to Epping, where it will connect to the existing Epping to Chatswood railway line.

All content from Kiddle encyclopedia articles (including the article images and facts) can be freely used under Attribution-ShareAlike license, unless stated otherwise. Cite this article:
Rouse Hill, New South Wales Facts for Kids. Kiddle Encyclopedia.