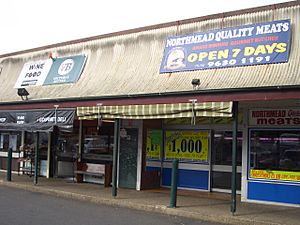 Northmead is a suburb of Sydney, in the state of New South Wales, Australia. Northmead is located 26 kilometres west of the Sydney central business district, in the local government area of the City of Parramatta. Northmead is part of the Greater Western Sydney region.

Northmead is a hilly suburb with low to medium density houses, townhouses and apartment buildings, and a large light industrial area. It is located to the northeast of the junction of Darling Mills Creek and Toongabbie Creek, which combine to form the beginnings of the Parramatta River.

With the British settlement of Parramatta, this area was originally part of the domain of Government House. What is left of this domain, including Government House, forms Parramatta Park. The name Northmead is derived from the location of the north "mead", or meadow, of the governor's domain. The land was subdivided between 1859 and 1889 and the Northern Meadow and Western Meadow of the domain were split off and called Northmead and Westmead. From this time, orchards were established by many new settlers, including some whose names were well known in the Parramatta area - George Oakes, Nat Payten and William Fullagar among them.

Northmead is the home of a large number of light industires, especially around Briens Road which runs along the back of the Westmead Hospital district. Along Briens Road are:

On Boundary Road, there is a bus depot for Hillsbus which is the Region 4 bus operator.

The North West T-Way connecting the Hills with Parramatta runs through Northmead. Northmead's public transport needs are only catered by buses, namely those of the Hillsbus bus company. This results in highly operational bus services in the Hills District - an area that is one of the fastest growing in Australia.

The major roads are Windsor Road and the Cumberland Highway.

Northmead once featured a train line known as the Rogans Hill railway line. Long underperforming due to an increasing preference for faster and more modern motor buses, it was decided in 1929 under conservative (United Australia Party) Premier Bertram Stevens that the line should be decommissioned, which eventually took place on 31 January 1932.

Currently, there is no train line that services Northmead with the closest being the Main Western Railway Line that runs through Westmead and Parramatta.

According to the 2011 census conducted by the Australian Bureau of Statistics, Northmead had a population of 10,224. This was a significant increase from the 2006 census, which showed a population of 6,969. This increase went hand in hand with an increase in apartments in the suburb from 9.9% to 29.9% over the period.

All content from Kiddle encyclopedia articles (including the article images and facts) can be freely used under Attribution-ShareAlike license, unless stated otherwise. Cite this article:
Northmead, New South Wales Facts for Kids. Kiddle Encyclopedia.