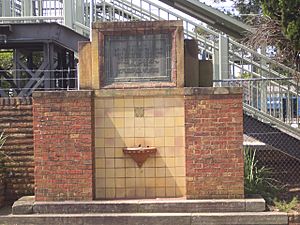 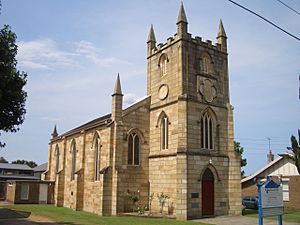 Wentworthville, Wentworth Falls in the Blue Mountains and, Wentworth in far western New South Wales, were named after the Wentworth family. A land grant of 2000 acres (8 km²) in this area was made in 1810 to D'Arcy Wentworth, the father of William Wentworth, the famous Australian explorer, barrister, newspaper publisher, politician and landowner.

Another pioneer to the area, William Fullagar established the Star Inn on the corner of Ettalong Road and the Western Road (now the Great Western Highway). Fullagar also opened a cattle saleyards which became one of the principal ones for the colony. His family's estate "Essington House" is now the site of a Christian school. Fullagar Road is named after him.

In the mid-1800s, a land boom attracted people into the area, land was subdivided for housing and small farms. Wentworth's holdings were sub-divided - amounting to 600 lots. The railway line had been put through on its way to Penrith, in 1864, but it was not until 1883 that Wentworthville got its own public railway station. Originally the railway station was called T. R. Smith's Platform but was renamed Wentworthville two years later.

In 2007 the boundaries were redrawn and the northern part of Wentworthville became the suburb of Constitution Hill.

Wentworthville railway station is on the North Shore & Western Line of the Sydney Trains network that connects west to Penrith and Richmond. After reaching the city, most trains continue north to North Sydney, Chatswood, Hornsby and Berowra. The station is also serviced by the Cumberland Line linking Richmond to Leppington. The trip to Sydney CBD typically takes 35 minutes.

The Wentworthville station was the site of the first major Tangara accident, a derailment, which occurred on 27 December 1989.

East of Old Prospect Road, the Liverpool-Parramatta T-way runs along the southern boundary. The North-West T-way runs just outside the suburb boundaries on Mons Road.

The M4 Western Motorway and the parallel Great Western Highway run east–west through the southern side. The Cumberland Highway runs through the western side of Wentworthville on its way south (from Hornsby via the Pennant Hills Road to Liverpool).

All content from Kiddle encyclopedia articles (including the article images and facts) can be freely used under Attribution-ShareAlike license, unless stated otherwise. Cite this article:
Wentworthville, New South Wales Facts for Kids. Kiddle Encyclopedia.