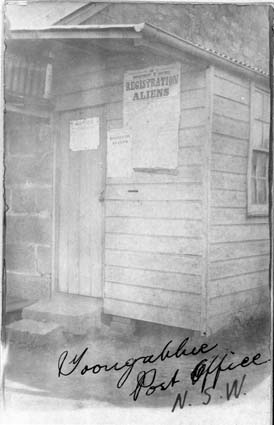 Old Toongabbie is a suburb of Sydney, in the state of New South Wales, Australia 29 kilometres west of the Sydney central business district in the local government area of the City of Parramatta. It is part of the Greater Western Sydney region.

Toongabbie is derived from an Aboriginal word, reported as meaning place by the water or meeting by the water. It was named in June 1792 after Governor Arthur Phillip asked the local Aborigines what they called the place. It is the oldest official use of an Aboriginal place-name - Parramatta which was founded earlier was first called Rose Hill.

Old Toongabbie is noted for being the third settlement set up after the British occupation of Australia began in 1788. It was founded as a Government Farm to grow food for the colony in April 1792. After eleven years, the government farm was closed and the land was given as grants to settlers and convicts who had done their time.

In 1860, the railway was extended to Blacktown but it took 20 years before any arrangements were made for trains to stop at Toongabbie. The first school in Toongabbie, opened on the 3rd of May 1886. By April 1911, the school closed due to low enrolments. The school reopened February the next year and has stayed open ever since.

The first post office in the area was opened after many years of campaigning by local residents in 1887 in a private house on Old Windsor Road and this arrangement continued until the 1960s. The first post master was a Mr Birks wand he was paid 25 pounds a year to manage the office and bring the mail bag over from Seven Hills on horseback each day. By 1922 the number of residents and businesses had grown sufficiently to support a second office in a weatherboard cottage in Wentworth Avenue, known as Toongabbie West. A purpose built office was opened in the main shopping area in Portico Parade in 1960 becoming Toongabbie Post Office whilst the old Toongabbie Post Office was renamed Old Toon

The area is bounded on the north east by Toongabbie Creek, a tributary of the Parramatta River. Although Toongabbie is relatively densely settled, in recent years programs of bushland regeneration, pollution control and remedial works to local waterways have seen a surprising return by several rare wildlife species, and in the 1990s platypus were reported to have returned to sections of Toongabbie Creek.

All content from Kiddle encyclopedia articles (including the article images and facts) can be freely used under Attribution-ShareAlike license, unless stated otherwise. Cite this article:
Old Toongabbie Facts for Kids. Kiddle Encyclopedia.