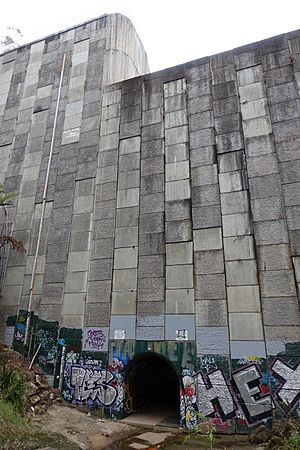 Colloquially known as the North Rocks Dam, off Rifle Range Road, about 30m in height. Not officially a dam, but a retarding basin wall. 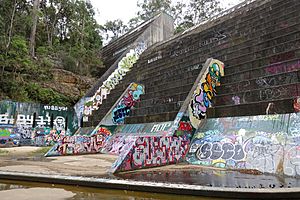 Rear of the North Rocks Dam Wall, about 30m in height.

North Rocks is a suburb of Sydney, in the state of New South Wales, Australia, located 26 kilometres north-west of the Sydney central business district. Following the amalgamation of council areas in 2016, the majority of North Rocks falls into the council area of the City of Parramatta. Streets north of the M2 Hills Motorway are within The Hills Shire.

The name "North Rocks" dates back to the beginning of the settlement at Parramatta and is older even than the name of the city itself, which at first was called Rosehill. In 1789 Governor Phillip reserved large areas to the north and west of Rosehill for the use of Government stock - the present Northmead and Westmead. The reserve to the north was described as extending as far as 'the North Rocks'. The area was also known as Jerusalem Rocks.

North Rocks was once considered as the haunt of convict bolters and bushrangers and regarded as an unsavoury area. With the constant flow of people between Windsor and Parramatta, a gold watch was always a good steal! A noted experience was the hold-up of Dr Sherwin in 1830 by John Macnamara and William Dalton, which resulted in ex-convicts' demise. The North Rocks were a massive sandstone outcrop, which terminated the ridge on the south side of Hunts Creek. These rocks so dominated the landscape and were such prominent features that they gave their name to the locality but were not preserved. In 1841 when it was decided to build a new gaol at Parramatta, a contractor bought the Rocks as they consisted of the best sandstone in the district - and were very conveniently situated. His tender was accepted, and much of the North Rocks became gaol walls and flagstones in 1844. Further inroads were made on what was left when the wall of masonry was erected in 1855-56 which held back the waters of Lake Parramatta. Much stone was needed for the dam, as the wall is about 240 feet (73 m) long and is fifteen feet thick at the base.

A North Rocks Post Office first opened on 1 February 1894; it was renamed Forrester later that year, Maraylya in 1921 and closed in 1970. The current Post Office opened on 1 November 1921.

Prior to North Rocks being rezoned around 1958, it housed around 40 farms, including peach and nectarine orchards, poultry farms and piggeries. When the area was rezoned, one of many new housing estates was named Lynwood Estate.

At the 2011 census, only 13.0% of employed people travelled to work on public transport and 67.3% by car (either as driver or as passenger).

The M2 Hills Motorway runs through North Rocks, and there is access to the motorway from Pennant Hills Road in Carlingford and Windsor Road in Baulkham Hills. Public transport to, from and throughout the area is provided by bus. 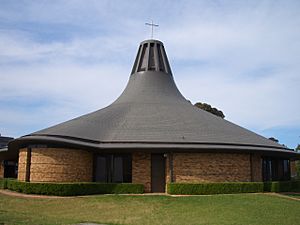 Public services in the suburb include a number of large reserves, sporting facilities, a community centre, and a number of schools, and an active Rotary and Lions clubs as well as Scout & Girl Guide groups. North Rocks also boasts an 18 hole competition Golf Course and club facilities on Barclay Road. There are also local softball, soccer, rugby clubs and the Murri-Yanna Track in Bidjigal Reserve which can be accessed from Whitbread Place.

North Rocks features a number of parks and reserves, such as the Bidjigal Reserve, which includes a towering eucalypt forest, weathered sandstone cliffs, sparkling creeks and sheltered rainforest gullies which surrounds the north and west periphery of the North Rocks border. Fauna includes koala, swamp wallaby, echidna, sugar gliders and eastern water dragon. Platypus were regularly seen up till the installation of the sewer in the mid-1970s, but none since. The diversity of birds is well known in Bidjigal Reserve with 127 species being documented. Rare insectivorous species such as wrens and thornbills have been recorded and the more common species of kookaburras and crimson rosellas seem to be doing well. In recent years, there has also been an increase in numbers of sulphur crested cockatoos and rainbow lorikeets. The powerful owl, Australia’s largest owl, also breeds in the reserve and can be heard hooting throughout North Rocks at night. Many of these bird species can be seen throughout North Rocks.

The 2011 census conducted by the Australian Bureau of Statistics reports the population of North Rocks as 7,625 residents, with 3,761 males and 3,864 females. The demographic breakdowns show that:

All content from Kiddle encyclopedia articles (including the article images and facts) can be freely used under Attribution-ShareAlike license, unless stated otherwise. Cite this article:
North Rocks, New South Wales Facts for Kids. Kiddle Encyclopedia.