Winston Hills is a suburb of Sydney, in the state of New South Wales, Australia. Winston Hills is located 28 kilometres west of the Sydney central business district in the local government areas of the City of Parramatta and The Hills Shire. Winston Hills is part of the Hills District region of Greater Western Sydney.

Winston Hills was named after Britain's Prime Minister Winston Churchill (1874–1965) during World War II. With the name being preferred to Churchill Hills. In the early days, this area was named Model Farms (a name retained in a local high school - see below) as this was the area where a model farm was developed to show settlers the types of crops that could be grown in different seasons.

Development of the suburb began in the 1960s, and there is little undeveloped land left. In 2009 the last remaining large parcel of vacant land, at Buckleys Hill, started to be developed. There is not much natural bushland left in the suburb, except for the creek corridors, like Toongabbie Creek. It was transferred from the local government area of the City of Blacktown to the City of Parramatta in 1972. 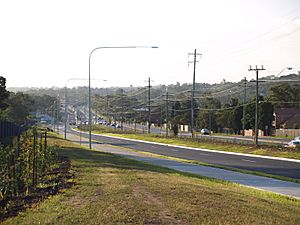 Some streets are named after great writers such as Bronte Place, Shelley Street, Twain Street and Homer Street which also links to other street names from Greek mythology such as Troy Place, Hera Place, Nestor Street, Ixion Street, Eros Place and Atlas Place. Other group of streets are named after great scientists Einstein, Volta, Lister, Edison and Marconi or Biblical figures such as Goliath, Gideon and Esther.

A residence on Oakes Road was sold December 2011. This property had been owned by the late Frank Whiting. The building on the site was once the accommodation for the staff who worked on the dairy situated on Oakes Road up to what is now Rebecca Parade. This dairy was operated by the Sisters of the Good Shepherd. It operated during the Second World War years. Frank purchased the property when the dairy closed in the late 1940s and Frank clearly remembered the One Tree Hill Golf course that ran from behind the dairy along what is now Rebecca Parade and Goliath Avenue up to Old Windsor Road.

Winston Hills has Girl Guides, Scouts, rugby league, baseball, football and netballclubs. The football club (The Bears) is one of the largest in suburban Sydney.

In 1983, Winston Hills Warriors Baseball Club was established after breaking away from Baulkham Hills. WHBC started playing at Col Sutton Park, just down the road from Model Farms High School. Winston Hills is one of the best clubs in senior A grade baseball in Sydney.

In 2010, the Winston Hills Girl Guides joined worldwide celebrations for the centenary (100th birthday) of the Guiding movement during the nationally acclaimed 'Year of the Girl Guide'. The Winston Hills Scouts also mark the 40th anniversary for their district.

All content from Kiddle encyclopedia articles (including the article images and facts) can be freely used under Attribution-ShareAlike license, unless stated otherwise. Cite this article:
Winston Hills, New South Wales Facts for Kids. Kiddle Encyclopedia.