Wilberforce is a small town in New South Wales, Australia, in the local government area of the City of Hawkesbury. It is just beyond the outer suburbs of north-west Sydney and lies on the western bank of the Hawkesbury River.

Wilberforce is one of the original settlements established as a township by Lachlan Macquarie, colonial governor of New South Wales 1810-21, and accordingly is locally known as a "Macquarie Town", a title given to townships established by Governor Macquarie on 6 December 1810 in and around the Sydney metropolitan area. It was named after William Wilberforce (1759–1833) who was a British politician, philanthropist and a leader of the movement to abolish the slave trade.

Key sites and points of interest

The historic St John's Anglican Church was designed by Edmund Thomas Blacket and built by J. Atkinson of Windsor. Construction was started in 1856 and the building was not completed until 1859 at a cost of £1500. The grounds of the church and contains the Old School House building (Built 1819), which was used as a school, a church, and a residence of the school master until the church was completed. The school house was replaced in 1880 by a Public School. The original church building is still used for the church's 8am service with the modern education centre used for later services.

Relocated to a position in front of the schoolhouse, the grave marks the death of a child bitten by a snake on a nearby property. Grave moved on 5 December 1960 by the Hawkesbury Historical Society. 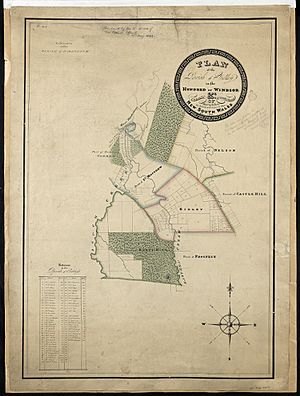 This is the original town square proclaimed by Macquarie, and still retains its original relationship with the schoolhouse, cemetery and townships.

In the park itself is the War Memorial, erected by local residents in 1918. In 1966 it was resited within the park, and new plaques were added at this time.

Opened around 1970, the village contains a number of buildings from the surrounding area which were physically transported to the site. Among them is 'Rose Cottage'; the oldest timber slab cottage in Australia standing on its original site.

This cemetery sits on Old Sackville Road near the intersection with Singleton Road (Putty Road). There are a number of graves of the area's pioneers; notably the somewhat unusual Table Slab Grave.

All content from Kiddle encyclopedia articles (including the article images and facts) can be freely used under Attribution-ShareAlike license, unless stated otherwise. Cite this article:
Wilberforce, New South Wales Facts for Kids. Kiddle Encyclopedia.