Mulgrave is a suburb of Sydney, in the state of New South Wales, Australia. Mulgrave railway station on the Richmond line is located in Mulgrave, and is 52.59 kilometres from Central railway station, Sydney.

Lieutenant Governor Francis Grose called the district near the present Pitt Town on which he settled the first 22 settlers 'Mulgrave Place' in honour of his friend Lord Mulgrave whose patronage he had enjoyed in England. 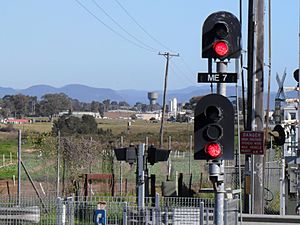 View towards Windsor and Blue Mountains, from Mulgrave railway station

All content from Kiddle encyclopedia articles (including the article images and facts) can be freely used under Attribution-ShareAlike license, unless stated otherwise. Cite this article:
Mulgrave, New South Wales Facts for Kids. Kiddle Encyclopedia.