Cattai is an historic suburb of Sydney, in the state of New South Wales, Australia. It is located 44 kilometres north-west of the Sydney central business district and 30 kilometres north-west of Parramatta. It is in the local government areas of The Hills Shire and City of Hawkesbury. Cattai's state electoral district is Hawkesbury, and its federal electoral divisions are Berowra and Macquarie.

Cattai is bounded in the north-west by the Hawkesbury River and is traversed by Cattai Creek. It encompasses the heritage-listed Cattai Estate, located within Cattai National Park at the junction of the Creek and the River. The Georgian house was built between 1804 and 1821 by former Magistrate Thomas Arndell, with further additions being made in the 1860s. Cattai is also home to a historic rural public primary school that was founded in 1886. The suburb was originally home to the Darug Indigenous Australians before being settled in the early nineteenth century.

The majority of people spoke only English at home (91.1%). The second most spoken language was Urdu (1.4%).

Cattai is an affluent suburb in the growing north-west of Sydney. The median weekly household income is A$2,318, which is 133.7% greater than the national average. In 2018, Cattai had a median house sale price of A$1.9 million. Over 30% of the households have an income greater than A$3,000 per week.

The name of the town, 'Cattai', is derived from an Aboriginal word with an unknown meaning. The First Fleet Assistant Surgeon, Thomas Arndell, built a homestead which resides in the now named Cattai National Park.

Cattai Public School was established in 1886, and is situated in the Hills District of Sydney, Australia. Arndell Anglican College was originally established in Cattai in 1990, until it moved to its current site of Oakville in 1994. 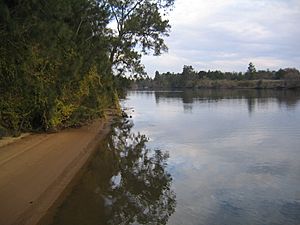 All content from Kiddle encyclopedia articles (including the article images and facts) can be freely used under Attribution-ShareAlike license, unless stated otherwise. Cite this article:
Cattai, New South Wales Facts for Kids. Kiddle Encyclopedia.