Blackheath (postcode: 2785) is an Australian town located near the highest point of the Blue Mountains, between Katoomba and Mount Victoria in New South Wales. The town's altitude is about 1,065 metres (3,494 ft) AHD  and it is located about 120 kilometres (75 mi) west north-west of Sydney, 11 kilometres (6.8 mi) north-west of Katoomba, and about 30 kilometres (19 mi) south-east of Lithgow.

Blackheath has a vibrant artistic community and hosts two monthly markets - the Blackheath Growers Market and The Blackheath Community Market, as well as annual Christmas markets, antique markets and bimonthly craft markets. The town has many community activities, such as the Blackheath Philosophy Forum, which was founded in 2002 to arrange public discussion forums on philosophy and related topics.

As Blackheath has grown, more and more shops have appeared. Various shops from the late 1800s still stand in Blackheath.

The region of what is now known as Blackheath was originally known as East Lithgow. Surrounding areas were thought to be a summer corroboree meeting place for several Indigenous peoples of the Darug, Gundungurra and Wiradjuri nations.

Following European settlement of Australia, the site was originally named Hounslow. After crossing the Blue Mountains in 1815 and returning from Bathurst, Governor Lachlan Macquarie renamed the settlement as "Black-Heath", in reference to the colour and texture of the native shrubbery in the area. Macquarie recorded in his journal:

"This place having a black wild appearance I have this day named it Black-Heath."

The first building in Blackheath, the "Scotch Thistle Inn", was erected by Andrew Gardner in 1831 and Charles Darwin visited the inn in 1836. The extent of the original grant of land to Gardner can be seen today as the area bound by the Great Western Highway, Govetts Leap Road and (the misspelt) Gardiners Crescent.

Blackheath developed into a town after the Main Western railway line was built in 1869; the current station location was completed in 1883. A large dam built to supply water for railway steam engines became the public baths well before steam operations ceased upon electrification. The baths opened for public swimming in 1931 and since then have been redeveloped to include swimming pools, children's play facilities and surrounding park lands. Blackheath's original post office opened in 1910 and has now been converted into a gift shop and cafe.

Blackheath's sporting claim to fame is that Don Bradman hit a century off three overs for the Blackheath team in November 1931 at Blackheath Oval in a social match against Lithgow. He went on to make 256. 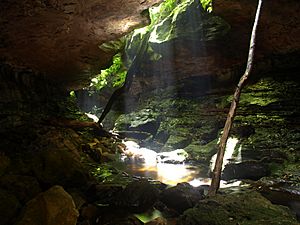 Inside the slot of the Grand Canyon at Blackheath in the Blue Mountains west of Sydney. Note the canyoner in the far end of the slot.

From Blackheath town centre, a short drive to the east northeast takes visitors to Govetts Leap, a lookout with spectacular views of the Grose Valley and nearby waterfalls. The fall is named after William Romaine Govett, an assistant to the Surveyor General at the time, who first came upon that spot in June 1831. The name 'leap' is an old Scottish word meaning waterfall or cascade. According to folklore, a bushranger named Govett rode off the cliff rather than be captured. This story is not verified by historical sources.

Evans Lookout provides an alternate vantage point for views, also into Grose Valley. Pulpit Rock, Perrys Lookdown and Anvil Rock are other lookouts to the north northeast of the town centre, off Hat Hill Road. There are several walking tracks starting from the lookouts, including short walks to enjoy different views, longer half and whole day walks, and walks involving camping overnight or several days walk. Canyoners and rockclimbers also base themselves at Blackheath for activities in the surrounding national park. The Blue Gum Forest may be accessed from Perrys Lookdown.

The area is known today for its colourful blooms in Spring and golden Autumn foliage as the weather begins to cool. In September, daffodils bloom and on the first weekend of November, Blackheath hosts an annual Rhododendron Festival.

The Campbell Rhododendron Gardens are located north northeast of the town centre, in Bachante Street. The 18.5 hectares (46 acres) gardens comprise Rhododendrons and Azaleas planted underneath a native Australian bush canopy; tended by the volunteers of The Blue Mountains Rhododendron Society of NSW. The gardens are a spectacular sight in the spring months of September through to November.

The ornamental cherry trees that line the streets are usually in full bloom in the first week of October and are considered one of the spectacles of the Blue Mountains.

Mount Boyce lookout is located northwest of Blackheath, towards Lithgow. The Megalong Valley can be accessed from Blackheath, about 18 kilometres (11 mi) away to the west, via Mount Victoria.

Blackheath has many cafes and restaurants, a large antique centre and other shops of interest to tourists. It is a popular destination for people from Sydney for a weekend excursion or a Sunday drive.

Blackheath was connected to the Main Western railway line in 1869, and the town is now served by the Blackheath railway station located on the Blue Mountains Line.

The area around Blackheath contains some of the most spectacular views in the Blue Mountains, including those over the Grose Valley from Evans Lookout and Govetts Leap in the east, and the lesser-known vista of the Megalong Valley from Hargraves Lookout in the west, past the tiny hamlet of Shipley.

As the highest town in the Blue Mountains, Blackheath receives snow in winter (two settled falls per season is the average with another five to ten days of light snow showers) and even in summer the temperatures are generally mild in comparison to other locations at the same latitude. Average maximum temperature in winter is around 9 to 10 °C (48 to 50 °F) although some days struggle to get above 5 to 6 °C (41 to 43 °F). Frosts are fairly common but not as common or strong as frosts on the Oberon Plateau or in places further west, like Bathurst and Orange. Local topography tends to keep minimum temperatures in the −3 to 5 °C (27 to 41 °F) range as the coldest air during radiative cooling (clear, calm nights) drains into the valleys.

In summer, average maximum temperatures are around 23 °C (73 °F) but temperatures occasionally peak at 30 °C (86 °F) on some days during mid-summer and can also drop to the mid teens, or lower, during southerly changes or when onshore troughs persist on the east coast. Minimum temperatures in summer are typically around 10 to 15 °C (50 to 59 °F) but minimums in single figures also occur, more commonly in December. In December 2011, a minimum of 2.4 °C (36.3 °F) was recorded.

Blackheath's location on a high ridge makes it vulnerable to strong and sometimes destructive winds, especially in the winter months when cold fronts surge up from the Southern Ocean, producing land gales. On 5 July 2011 a strong cold front passed over the area that produced winds that officially gusted up to 139 kilometres per hour (86 mph), causing many trees to be uprooted and extensive damage to some property. The Venturi effect, where airflow is constricted by vertical cliffs and deep valleys, would probably have produced winds notably stronger than this in vulnerable locations in town and nearby. Land gales are more likely to occur from around April to November but vary in their intensity from year to year. Spring and summer storms can also produce fresh to strong winds, typically in the range of 70 to 90 kilometres per hour (43 to 56 mph).

Blackheath can also be prone to fogs and thunderstorms, although this varies notably from year to year. Some days in summer are quite humid, allowing for moisture to build during the day, sometimes creating severe storms that can last for hours. The most common cause for quite frequent spring/summer thunderstorms in and around Blackheath is related to the early, mid morning heating of the lower atmosphere, due to the town's elevation.

Blackheath is surrounded by the Blue Mountains National Park which is prone to bushfires. In November 2006 severe bushfires threatened Blackheath from the north.

Blackheath experiences a subtropical highland climate with monthly average temperatures not falling below −3 °C (27 °F) and not exceeding 25 °C (77 °F). Blackheath's average annual precipitation is just over 1,000 millimetres (39 in).

All content from Kiddle encyclopedia articles (including the article images and facts) can be freely used under Attribution-ShareAlike license, unless stated otherwise. Cite this article:
Blackheath, New South Wales Facts for Kids. Kiddle Encyclopedia.