Sackville (Doorumbolooa) is a suburb of Sydney, in the state of New South Wales, Australia. It is located in the City of Hawkesbury and at the 2016 census had a population of 298, thirteen of whom identified as Aboriginal and Torres Strait Islander.

Sackville is situated on the Hawkesbury River, and is the site of the Sackville Ferry, a car ferry that crosses the river to North Sackville. The suburb is home to five National Heritage Listed sites: Three residences, St Thomas' Anglican Church and the Sackville Cemetery, which dates back to 1828.

Sackville is bound by Ebenezer and Wilberforce to the South, East Kurrajong to the East and Lower Portland to the North. 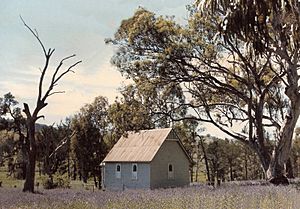 A shed in Sackville

Sackville was first settled as a farming community by colonists in 1803, and the settlement was named after Viscount Sackville, the British Secretary of State for the Colonies between 1775 and 1782. It is located on the rich alluvial soil of the flood plains of the Hawkesbury, was close to a readily available fresh water supply, and had transportation links to Sydney via the Hawkesbury River.

The railway from Sydney to Windsor opened in 1864, which meant that farm produce could be shipped upriver for onward transportation by train. However, by the 1880s the river had become silted up between Sackville and Windsor, and Sackville became the head of navigation for seagoing vessels. The SS Hawkesbury, operating from the 1880s, and the SS Narara, from 1900 until it sank in 1909, linked Sackville to Sydney.

A ferry service is known to have operated across the river at Sackville since at least 1883, and possibly the 1870s.

All content from Kiddle encyclopedia articles (including the article images and facts) can be freely used under Attribution-ShareAlike license, unless stated otherwise. Cite this article:
Sackville, New South Wales Facts for Kids. Kiddle Encyclopedia.