His ministry received much of the blame for Britain's loss of thirteen American colonies. His issuance of detailed instructions in military matters, coupled with his failure to understand either the geography of the colonies or the determination of the colonists, may justify this conclusion. He had two careers. His military career had distinction, but ended with a court martial. Sackville served in the War of the Austrian Succession and the Seven Years' War, including at the decisive Battle of Minden. His political career ended with the fall of the North government in March 1782.

Sackville was the third son of Lionel Sackville, 1st Duke of Dorset, and his wife Elizabeth, daughter of Lieutenant-General Walter Philip Colyear. His Godfather George I attended his baptism. He was educated at Westminster School in London and graduated from Trinity College in Dublin in 1737. Between 1730 and 1737 and again from 1750 to 1755, his father held the post of Lord Lieutenant of Ireland. While in Dublin he befriended the celebrated writer Jonathan Swift. He also encountered Lord Ligonier who would later assist his career in the military.

He then entered the army. Sackville was elected Grandmaster of the Grand Lodge of Ireland in 1751, serving in this post for the next two years.

He married Diana Sambrooke, daughter of John Sambrooke and Elizabeth Forester, on 3 September 1754. They had two sons and three daughters, including:

Sackville started as a captain in the 7th Horse (later the 6th Dragoon Guards). In 1740, he transferred to the Gloucestershire Regiment of Foot as a lieutenant colonel. The regiment was sent to Germany to participate in the War of the Austrian Succession. In 1743. Sackville was advanced to brevet colonel.

The Battle of Fontenoy in 1745 where Sackville first distinguished himself. He was wounded and captured by the French.

He saw his first battle, leading the charge of the Duke of Cumberland's infantry in the Battle of Fontenoy in 1745. He led his regiment so deep into the French lines that when he was wounded and captured he was taken to the tent of Louis XV. When he was released and returned home, it was to duty in Scotland as the Colonel of the 20th Foot Regiment.

In 1747 and 1748, he again joined the Duke of Cumberland. He became colonel of the 7th Irish horse and served in Holland. There was a break in his military career between wars (1750-1755) when he served as first secretary to his father.

During the Seven Years' War, Sackville returned to active military service. He had been considered for the post of Commander-in-Chief in North America, which eventually went to Edward Braddock who led his force to disaster during the Braddock Campaign. In 1755, he was promoted to major general and returned to active service to oversee ordnance. In 1758, he was given a fourth regiment and joined the Duke of Marlborough as a lieutenant general. He was sworn of the Privy Council in January 1758.

In June 1758 Sackville was second in command of a British expedition led by Marlborough which attempted an amphibious Raid on St Malo. While it failed to take the town as instructed, the raid was still considered to have been largely successful as a diversion. Follow-up raids were considered against Le Havre, Caen and other targets in Normandy but no further landings were attempted and the force returned home.

Later in 1758 they joined the allied forces of Duke Ferdinand of Brunswick in Germany, with the first detachment of British troops sent to the Continent. When Marlborough died, Sackville became Commander of the British contingent of the army, although still under the overall command of the Duke of Brunswick.

In the Battle of Minden on 1 August 1759, British and Hanoverian infantry of the centre made an advance on the French cavalry and artillery in that sector. They apparently went in without orders and their attacking line formation even repulsed repeated French cavalry charges, holding until the last moment then firing a massive volley when the charge came within ten yards. As the disrupted French began to fall back on Minden, Ferdinand called for a British cavalry charge to complete the victory, but Sackville withheld permission for their advance. Ferdinand sent his order several times, but Sackville was estranged from Lord Granby, the force commander. He continued to withhold permission for Granby to gain glory through an attack. For this action, he was cashiered and sent home. Granby replaced him as commander of the British contingent for the remainder of the war.

Sackville refused to accept responsibility for refusing to obey orders. Back in England, he demanded a court martial, and made it a large enough issue that he obtained his demand in 1760. The court found him guilty, and imposed one of the strangest and strongest verdicts ever rendered against a general officer. The court's verdict not only upheld his discharge, but ruled that he was "...unfit to serve His Majesty in any military Capacity whatever.", then ordered that their verdict be read to and entered in the orderly book of every regiment in the army. The king had his name struck from the Privy Council rolls. 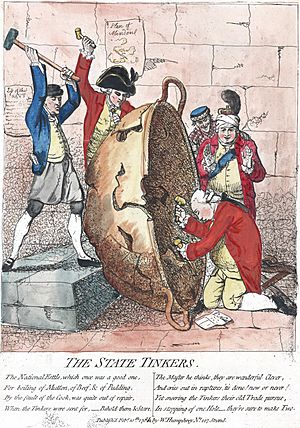 In The State Tinkers (1780), James Gillray caricatured Germain (second from left) and his political allies as incompetent tinkers of the National Kettle. Posted on the wall behind Germain is the "Plan of Minden".

Sackville had been a Member of Parliament at intervals since 1733. He had served terms in both the Dublin and the Westminster bodies, sometimes simultaneously, but had not taken sides in political wrangles.

Between 1750 and 1755 he served as Chief Secretary for Ireland, during his father's second term as Lord Lieutenant of Ireland.

When George III took the throne in 1760, Sackville began his political rehabilitation. There did not seem to be negative repercussions to the European stalemate of the Seven Years' War. The victories over the French within the colonial empire provided a chance for events of the war to be forgotten. The difficulty of repaying the debts incurred to fight the war caused a period of unstable ministries and shifting political alliances. In 1765, King George quietly returned him to the rolls of the Privy Council. 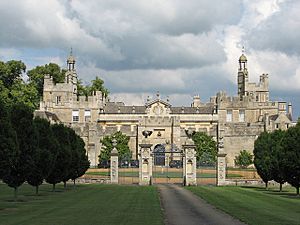 Initially he was a follower of George Grenville's faction but he increasingly lined up as a supporter of Lord North and, in 1769, he made this alliance formal. Then, in 1769, Lady Elizabeth Germain died without natural heirs, and left her estates, including Drayton, Northamptonshire, to him. This not only improved his finances, it also gave him the chance to take that name formally. After 1770, he was known as Lord George Germain.

On 10 November 1775, Germain was appointed Secretary of State for the American Department replacing Lord Dartmouth in the post. At that time, North's cabinet had three secretaries of state; one each for Europe (the Northern Department), America, and the rest of the world (the Southern Department). Besides international relations, these secretaries were responsible for a great deal of Colonial administration and for military operations within their area. This made Germain the primary minister responsible for suppressing the rebellion that had broken out in 1775 in the colonies. He promoted or relieved Generals, took care of provisions and supplies, and became involved with the strategic planning of the war.

Sackville and Lord North made three assumptions about the war they were about to face: firstly, the American forces could not withstand the assaults of the British; secondly, the war would be similar to wars they had fought successfully in Europe; and lastly, their victory would bring about their goal of having the colonies' allegiance. All of their assumptions proved to be false, with the limited and unhelpful exception of the first, in that the American forces usually could not withstand the assaults of the British in open battle but instead adopted other, more successful, tactics.

In 1776 he worked with General Burgoyne to plan, support and issue orders for the Saratoga campaign. However, his unclear orders to General Howe contributed to the campaign's failure. Following the entry of France, Spain and the Dutch Republic into the conflict, British emphasis shifted to focus increasingly on a global war. British troops were withdrawn from Philadelphia and reinforcements were sent to the valuable sugar-producing West Indies. In 1779 one of Germain's associates, Richard Cumberland was sent to Madrid for talks designed to reach a separate peace settlement with Spain, but this attempt failed.

In 1781, the confusion involving orders sent to Cornwallis from Clinton contributed to the loss at Yorktown. The news of Yorktown reached London on 25 November 1781 and the messenger went first to Germain's residence at Pall Mall. Germain then went to tell other ministers. Together they went to Lord North who reportedly cried out "Oh God - It's all over". It was agreed that Germain, rather than North, should take the news to the King who was at Kew. The King's Speech two days later had to be re-written in light of Yorktown. News of the surrender galvanised the Opposition and government majorities began to shrink over the following months with calls for resignations of senior ministers. Germain drew up a plan to continue the war using the existing British bases in Charleston, New York, Savannah and Canada to harass the American coastline and frontiers. He also advocated re-occupying Newport in Rhode Island to give a foothold in New England.

Germain became a target for the opposition, and was eventually persuaded to step down in exchange for a peerage, and in February 1782 he was made Baron Bolebrooke, in the County of Sussex, and Viscount Sackville, of Drayton in the County of Northampton. This was considered essential if the North government was to survive by bringing in factions of the opposition, to whom Germain was personally objectionable. He was replaced by Welbore Ellis. In spite of Germain's departure, the North government fell shortly afterwards in February 1782 and was followed by a period of political instability. Shortly after the fall of the North government, news arrived of the decisive British naval victory at the Battle of the Saintes in the Caribbean, which would have boosted the government had it still been in power. The Shelburne government agreed to the Peace of Paris, bringing an end to the war in 1783 and recognising the independence of the United States. 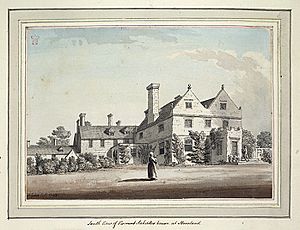 The controversy over Lord Sackville's handling of the war continued. Some members were opposed to his taking a seat in the House of Lords, an almost unprecedented incident. In spite of this he was admitted to the Lords, where he was staunchly defended by Lord Thurlow, and his declining health soon made the issue irrelevant. He retired to his country home at Stoneland Lodge and died there in 1785. He maintained to his dying day that he had not been a coward at Minden. Following his death, a defence of Sackville's reputation, The character of the late Viscount Sackville, was written by Richard Cumberland.

The Drayton House estate passed to his son Charles, who later became the 5th (and last) Duke of Dorset. The Stoneland estate (or Buckhurst Park as it came to be known) passed via the wife of the late 3rd Duke of Dorset to her daughter Countess de la Warr on the Dowager Duchess's death in 1825.

All content from Kiddle encyclopedia articles (including the article images and facts) can be freely used under Attribution-ShareAlike license, unless stated otherwise. Cite this article:
George Germain, 1st Viscount Sackville Facts for Kids. Kiddle Encyclopedia.