Clovelly is a small beach-side suburb in Sydney's eastern suburbs, in the state of New South Wales, Australia. Clovelly is located 8 kilometres south-east of the Sydney central business district, in the local government area of the City of Randwick, within the Federal Division of Wentworth.

Clovelly is a mainly residential suburb on Clovelly Bay. Clovelly Beach is a small beach that sits on the end of the narrow bay. Clovelly Beach was closed in March 2020 because of COVID-19. The bay is popular with swimmers. The bay is home to one of the first surf lifesaving clubs in the world, Clovelly Surf Life Saving Club, which was founded in 1906. Clovelly is surrounded by the suburbs of Bronte in the north, Waverley in the northwest, Randwick in the west and Coogee in the south. 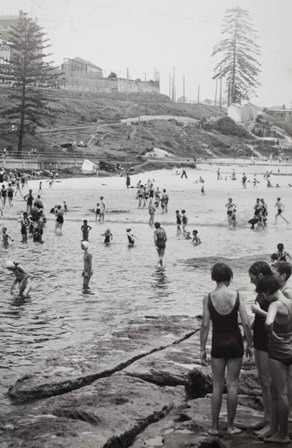 Originally known as Little Coogee, the name was changed to Clovelly in 1913. When the search for a new name began, the English seaside town Eastbourne, was suggested. The president of the local progress association, Mr F H Howe, suggested Clovelly, the name of a local estate owned by Sir John Robertson, which was named for the village of Clovelly on the north Devon coast, England.

William C. Greville bought 8 hectares (20 acres), which included the whole bay frontage, for 40 pounds in 1834. The area was dominated during the nineteenth century by the grand estate of Mundarrah Towers. Mundarrah Towers was built for Dr Dickson in the 1860s. Samuel Bennett, who owned Australian Town and Country Journal, one of the most influential newspapers of the day, bought the property and made further grand additions. The Towers was demolished in 1926, to make way for suburban development. The Mundarrah Towers estate occupied the land around Burnie Street overlooking the western end of Clovelly Bay. Mundarrah Street honours this once grand part of Clovelly’s heritage. Between Coogee and Clovelly, on the shores of Gordon’s Bay, stood Cliffbrook, the home built for John Thompson. By the early twentieth century the first governor of the Commonwealth Bank owned this grand mansion that was demolished in 1976. 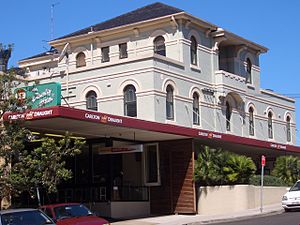 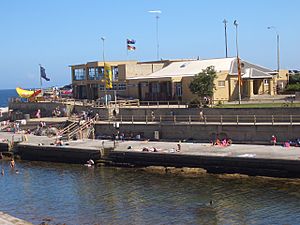 A public infants school was operating in Little Coogee as early as 1897, in the Mission Hall of the Church of England in Varna Street. Eliza McDonnell was the teacher with an average attendance of 76 pupils. Clovelly Public School officially dates from 1913. The Department of Education provided permanent accommodation for a public school in Arden Street, Clovelly.

Major subdivisions for domestic housing commenced in earnest in Clovelly in 1909. The local progress association argued that there were 717 houses constructed within metres of the proposed tram route that had not yet been completed. Due to these lobbying efforts, the tram-line to Clovelly was completed between 1912-1913. This allowed Clovelly to continue developing throughout the 1920s. During the Great Depression Randwick Council instituted a scheme to keep unemployed men employed by building concrete foreshores for Clovelly in an attempt to make access to the bay’s foreshores easier for bathers. The Council envisaged an Olympic size swimming pool in the bay, a facility that would also keep local men employed in the worst financial times. It was also planned to build a causeway/scenic road across the entrance to the Bay but wild storms in 1938 dashed hopes of this. The remains of the causeway are still visible at low tide, forming a protective reef. The plans were controversial; the merits of this work are still debated today.

In 1907, a surf life saving brigade was formed at Clovelly, inaugurating the surf life saving tradition in this suburb that has seen numerous heroic rescues, including "the rescue off Schnapper" or "the big rescue" of Sunday 4 December 1927. Surf Life Saving has been a predominate part of the culture and heritage of this scenic coastal suburb. Competitive swimming is also a dominant part of life in this idyllic coastal location.

Today the suburb is affectionately referred to as "Cloey" by many residents and locals.

The Clovelly tram line began at Alison Road to the intersection of Clovelly and Carrington Roads in 1912, then extending to Clovelly in 1913 helping to popularise the area. This line branched from Anzac Parade at Alison Road, and ran on its own tram reservation beside Centennial Park as far as Darley Road. Here it diverged from services to Coogee, to run north along Darley Road, then turned right into Clovelly Road to run down to its terminus at Clovelly Beach. Though services ran from Circular Quay and from Railway Square (from 1923). the line closed in 1957. The tram line followed the current route of bus 339.

In the 2016 census, Clovelly had a population of 4,736 people. 67.3% of people were born in Australia. The next most common countries of birth were England 8.2% and New Zealand 2.5%. 83.2% of people spoke only English at home. The most common responses for religion were No Religion 38.5%, Catholic 25.3% and Anglican 12.7%. Clovelly's housing is higher density than much of Australia with 73.4% of dwellings being units, flats, semi-detached, terrace houses or townhouses. The national average for these housing types is 25.8%.

In summer, Clovelly Beach is a centre of community activity patrolled by council lifeguards on weekdays and Clovelly Surf Life Saving Club members on weekends/public holidays. In 2006 there were over 200 proficient club members rostered into 13 active patrols.

Clovelly is a popular spot for snorkelling and is famous for its enormous blue gropers.

Lawn bowls can be played at Clovelly Bowling Club, which is situated on a clifftop with a scenic backdrop.

All content from Kiddle encyclopedia articles (including the article images and facts) can be freely used under Attribution-ShareAlike license, unless stated otherwise. Cite this article:
Clovelly, New South Wales Facts for Kids. Kiddle Encyclopedia.