Clovelly (/kləˈvɛli/) is a harbour village in the Torridge district of Devon, England. Its steep pedestrianised cobbled main street, traditional architecture, donkeys and views over the Bristol Channel attract numerous tourists. At the 2011 census, the parish population was 443, which was 50 fewer than ten years previously. The ward of Clovelly Bay includes the island of Lundy.

An entrance fee is charged to enter the village via a village visitor centre which also charges for parking, entrance to two museums, Clovelly Court gardens, and an audiovisual history guide.

The South West Coast Path National Trail runs from the top of the village. The village is privately owned, by John Rous as of March 2021; he inherited in 1983. The village "has mainly been in the Hamlyn family since 1738", and he is of that line. 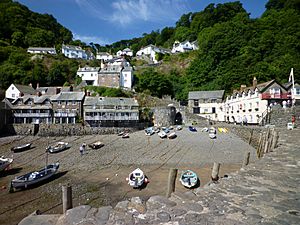 Lower part of the village, from the harbour wall

Northwest of the village is the site of an Iron Age hillfort at Windbury Head.

All Saints' Church, restored in 1866, is late Norman. In the reign of King Richard II, the Manor of Clovelly was bought by the judge Sir John Cary, and the church contains several monuments to the Cary family, Lords of the Manor for 600 years.

Clovelly was a solely agricultural parish with no harbour until the late 16th century, when the squire, George Cary, had the stone pier erected, thus providing the only haven on this coast between Appledore and Boscastle. He also erected fish cellars and warehouses at the cliff base, and cottages along the banks of the stream that provided the only route to the shore from the plateau above. The works cost him £2,000 and turned Clovelly into a fishing village.

The privately owned village and has been associated with only three families since the middle of the 13th century. The estate is run by the Clovelly Estate Company, led by John Rous, a descendant of the Hamlyn family who have owned the village, estate and manor house, Clovelly Court, since 1738. John Rous is the only son of Keith Rous, the 5th Earl of Stradbroke and Mary Asquith, granddaughter of former Prime Minister H. H. Asquith. As of 2021, Clovelly included approximately "80 cottages, two chapels, two hotels", woodlands and about 2000 acres of farmland. The village encourages tourism and has been financially successful in that endeavour as of 2019.

The only Grade I listed building is the Church of All Saints. The listing summary states, "Virtually all C15 and early C16, restored in 1843 and again in 1884". 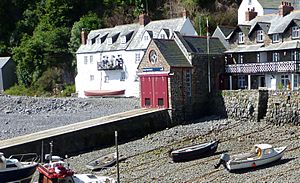 The village has an RNLI lifeboat station with its boat, the Toby Rundle, installed in 2014.

The village main street is not accessible by motor vehicles.

The lack of vehicular access to the main street has led to deliveries being made by sledge. This is not done as a tourist attraction, but as a matter of practicality. Goods are delivered by being pulled down on a sledge from the upper car park, and refuse is collected by being pulled down the hill to a vehicle at the harbour. 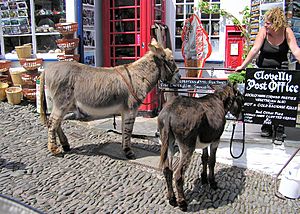 Donkeys on the steep main street, outside the village's post office. The slope can be seen by comparing the cobbled street with the (level) slate pavement in front of the shop.

The village is served by Stagecoach bus service 319; the route includes Barnstaple, Bideford and Hartland.

All content from Kiddle encyclopedia articles (including the article images and facts) can be freely used under Attribution-ShareAlike license, unless stated otherwise. Cite this article:
Clovelly Facts for Kids. Kiddle Encyclopedia.