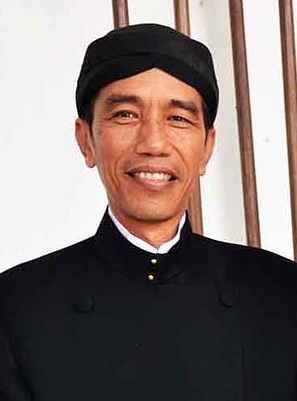 Joko Widodo (born Mulyono; 21 June 1961), also known as Jokowi, is an Indonesian politician who is the seventh and current President of Indonesia. Elected in July 2014 as the first Indonesian president to not come from an elite political or military background, he was previously the Mayor of Surakarta from 2005 to 2012, and the Governor of Jakarta from 2012 to 2014.

He achieved national prominence in 2009 for his work as the Mayor of Surakarta. A member of the Indonesian Democratic Party of Struggle (PDI-P), he was its candidate for the 2012 Jakarta gubernatorial election, alongside Basuki Tjahaja Purnama as his running mate.

Defeating Fauzi Bowo, he took office in October 2012 and gave a new energy to Jakarta politics, with publicized blusukan visits (unannounced spot checks) and improving the city's bureaucracy, reducing corruption in the process. He also introduced years-late programs to improve quality of life in the city, including universal health-care, dredging the city's main river to reduce flooding, and establishing construction of the city's subway system.

Seen as a rising star in Indonesian politics, PDI-P nominated Jokowi for the 2014 presidential election. Winning a majority of the popular vote, he was named president-elect on 22 July 2014.

As president, Jokowi has primarily focused on infrastructure, introducing or restarting long-delayed programs to build highways, high-speed rail, airports and other facilities to improve connectivity in the Indonesian group of islands.

On foreign policy, his administration has placed an emphasis on "protecting Indonesia’s sovereignty", with the sinking of illegal foreign fishing vessels and the prescription of capital punishment for drug smugglers, despite intense pressure from foreign powers including Australia and France. After four years in office, Jokowi's approval ratings remain high. He will seek re-election in 2019.

Joko Widodo is of Javanese descent. Before changing his name (changes of name are not unusual in Java), Jokowi's name was Mulyono. Jokowi is the eldest of four siblings and is the only son of Notomiharjo (father) and Sujiatmi (mother). His education began in State Elementary School 111 Tirtoyoso, known for being a school for less wealthy citizens. At the age of twelve, he started working in his father's furniture workshop. The evictions he experienced three times in his childhood affected his way of thinking - and his leadership later on as the mayor of Surakarta (Solo) - as he organised housing in the city.

Jokowi graduated from the Forestry faculty at Gadjah Mada University, Yogyakarta, in 1985 where his work included studies and research on the use of plywood. He began work at a state-owned firm in the province of Aceh, but he soon became uninterested in his activities in the firm and returned home. He then began working in his grandfather's furniture factory before establishing his own company, Rakabu, whose namesake is his first child.

The company's products were successful in international markets. Products were sold, for example, in France where the goods first established a presence in the European market. It was a French customer named Bernard who gave Joko Widodo the nickname he is famous for, 'Jokowi'. Ultimately he decided to become a politician and promote reform in his home town, Surakarta, after seeing the neat layouts of some European cities while promoting his furniture there.

Jokowi ran in the mayoral race in Surakarta in 2005 with F. X. Hadi Rudyatmo as his running mate, the pair won the vote. When Jokowi first ran for the office of mayor, his background as a property and furniture businessman was questioned. One academic paper claimed his leadership style was successful because it established an interactive relationship with the people of Solo, through which he was able to induce people's strong faith in him. He adopted the development framework of European cities (which he frequently traveled to as a businessman) as a guide for changes in Surakarta.

Jokowi's policies during the seven years that he was mayor of Surakarta included: 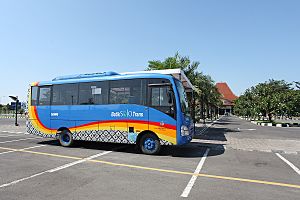 His supporters pointed to rapid positive changes in Surakarta under his leadership and the branding the city with the motto 'Solo: The Spirit of Java'. In 2010, he was reelected for his second term, once more running with Hadi.

While in office he successfully relocated antique stalls in the Banjarsari Gardens without incident, a helpful move in revitalizing the functions of the open green land; he emphasized the importance of business firms engaging in community activities; he improved communications with the local community by appearing regularly on local television.

As a follow-up of the new branding of Surakarta, he applied for Surakarta to become a member of the Organization of World Heritage Cities, which was approved in 2006, and subsequently had Surakarta chosen to host the organization's conference in October 2008. 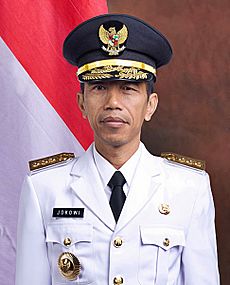 Joko Widodo in his official portrait as Governor of Jakarta 2012

Jokowi won the 2012 gubernatorial election in Jakarta. While governor of Jakarta, Jokowi continued the blusukan practice he had adopted as mayor of Surakarta by regularly visiting population centres, especially slums. During these visits, he wore simple informal clothes and stopped at markets or walked along narrow Jakarta alleys to listen and witness firsthand about issues addressed by local residents such as the price of food, housing difficulties, flooding, and transportation. Jokowi's hands-on style proved very popular both in Jakarta and elsewhere across Indonesia.

Jokowi and his wife, Iriana, have three children. The pair has two grandchildren as of 2018.

When his son graduated from ACS International in 2014, Jokowi flew economy class on a commercial Garuda Indonesia flight to Singapore instead of using the presidential jet to attend the ceremony. This gained news in both the Indonesian and Singaporean media because he was seen as showing humbleness towards Indonesian society. Jokowi vowed to not take the presidential jet for personal matters.

In June 2013, a film titled Jokowi, depicting Widodo's childhood and youth, was released. Widodo expressed some objections to the film saying that he felt his life had been a simple one and was not worthy of being adapted into a film.

Jokowi "has a liking for loud rock music" and owned a bass guitar signed by Robert Trujillo of heavy metal band Metallica, that was confiscated by the anti-corruption commission, KPK. He is a fan of Metallica, Lamb of God, Led Zeppelin and Napalm Death, a grindcore band that is known for their humanist and socialist political views.

In November 2017, Danish Prime Minister Lars Løkke Rasmussen, who was on an official visit to Jakarta, gave Widodo a Metallica Master of Puppets vinyl box set as a diplomatic gift. The vinyl case was signed by the band's drummer and co-founder, Lars Ulrich, a Danish native. In accordance to his policy of transparency, Widodo paid 11 million rupiah out of his personal funds to claim the record, which had been declared a state asset in order to avoid accusations of corruption.

All content from Kiddle encyclopedia articles (including the article images and facts) can be freely used under Attribution-ShareAlike license, unless stated otherwise. Cite this article:
Joko Widodo Facts for Kids. Kiddle Encyclopedia.