On 28 September 2018, a shallow earthquake struck in the neck of the Minahassa Peninsula, Indonesia, with its epicentre located on the mountainous Donggala Regency, Central Sulawesi. The quake was located 77 km (48 mi) away from the provincial capital Palu, and was felt as far away as Samarinda on East Kalimantan and also in Tawau, Malaysia. This event was preceded by a sequence of foreshocks, the largest of which was a 6.1 magnitude tremor that occurred earlier that day.

Following the mainshock, a tsunami alert was issued for the nearby Makassar Strait, but was called off an hour after. However, a localised tsunami later struck Palu, sweeping shore-lying houses and buildings on its way. The combined effects of the earthquake and tsunami led to the deaths of at least 844 people and injured a further 540. This makes it the deadliest earthquake in Indonesia since the September 2009 Sumatra earthquake, as well as the deadliest earthquake so far in 2018. The Indonesian Agency for Meteorology, Climatology and Geophysics (BMKG) confirmed that a tsunami had been triggered with its height reaching an estimated maximum of 4 to 6 metres, striking the settlements of Palu, Donggala and Mamuju along its path.

Sulawesi lies within the complex zone of interaction between the Australian, Pacific, Philippine and Sunda Plates in which many small microplates are developed. The main active structure onshore northern Sulawesi is the left-lateral NNW-SSE trending Palu-Koro strike-slip fault that forms the boundary between the North Sula and Makassar blocks. The rate of slip along this fault is estimated to be in the range 30–40 mm per year. At Palu, there are several parallel fault strands defining the margins of a pull-apart basin, each of which take up some of the overall slip.

The mainshock was preceded by a sequence of foreshocks starting about three hours earlier with a M6.1 event, followed by several others, all located in the area immediately south of the mainshock epicentre.

The first foreshock occurred at 15:00 local time. The earthquake struck at a shallow depth of 10 km with a magnitude of 5.9 ML(BMKG). The USGS registered the size of the quake as 6.1 Mw. Strong shaking was felt in Donggala. At least 1 person was killed by fallen debris while 10 others were injured. Authorities confirmed that dozens of structures were either damaged or destroyed in the quake. 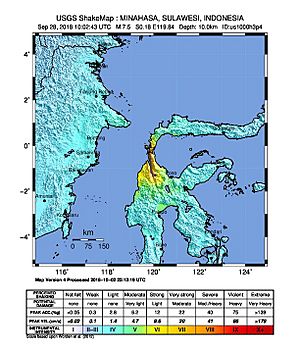 Shakemap of the 2018 Sulawesi earthquake

The mainshock magnitude was initially reported as M7.7 by both the USGS and BMKG. The USGS later revised their estimate to M7.5. The focal mechanism of the earthquake showed that it was caused by strike-slip faulting on faults trending either roughly north-south or west-east. Further analysis of seismic waveforms suggests that a fault trending north-south gives a better fit. The earthquake was caused by movement on the Palu-Koro fault.

The mainshock occurred at 18:02 local time, during rush hour traffic. The shaking was felt as far away as Samarinda, the capital of East Kalimantan, to the west and Makassar in the south. It was also felt in several parts in Gorontalo, located on the north and was also felt in Tawau, Malaysia. Violent shaking was reported in Donggala and Palu. Blackouts occurred throughout the area and telecommunications went down. The state-owned Telkomsel reported that more than 500 wireless communication towers had been damaged by the earthquake.

Indonesian authorities confirmed that no one had been able to contact a single person from Donggala, the closest town to the epicentre. Contacts were finally established on 30 September.

The mainshock was followed by a series of aftershocks, with 14 of M≥5.0 in the first 24 hours.

The earthquake was felt over a wide area. Noticeable shaking, ranging from II-III, was reported in Samarinda, Makassar and Tawau. The strongest shaking was felt in Donggala Regency where a maximum intensity of IX(violent) was recorded. The maximum intensity in Palu, the provincial capital of Central Sulawesi, was at VII (strong). According to the Indonesian Agency for the Assessment and Application for Technology (BPPT), energy released by the quake was 200 times to that released in the 1945 nuclear bombing of Hiroshima. Analysis also showed that the shoreline which was located near the rupture in Palu and Donggala had a decrease on its height. Height drops of 0.5–1 meter were recorded, while an increase of height of around 0.3 cm was recorded in Banawa.

Indonesian officials calculated the estimated time of arrival of the tsunami. Calculation suggests that the tsunami will arrive in Palu approximately 20 minutes after the earthquake. Around 17:27 local time, the meteorological agency in Mamuju detected tsunami waves. The tsunami warning was called off at 17:37. At the time, the tsunami had struck Palu.

As Palu was located at the end of a narrow bay, the tsunami's force was intensified when the waters entered. Officials confirmed that the waves that struck Palu had actually reached a height of 5 metres, with some as nearly as high as 6 metres.

In Palu, the capital of Central Sulawesi, a mosque and a major section of the Antapura Hospital collapsed. Palu's Tatura Mall, one of the oldest shopping centres in Palu, collapsed, trapping dozens of people. An eight-story hotel, identified as the Roa-Roa Hotel, had also collapsed, trapping numerous hotel guests, several of whom were participants of the Palu's annually-held paragliding festival. At the time of the earthquake, 76 of the 80 bedrooms of the hotel were occupied.

Palu's Mutiara SIS Al-Jufrie Airport was forced to close as large cracks, one of which was 500 meters long, had been formed on the runway. Airport officials confirmed that the navigation system was damaged and the control tower of the airport collapsed. An air traffic controller, who was watching the take-off roll of a Batik Air plane during the earthquake, was killed. The airport was reopened for limited operation on 29 September 2018. Hundreds of passengers were stranded at the airport. Officials also confirmed that normal operation will return on 30 September.

Authorities confirmed that numerous settlements and residential areas, including more than a thousand homes, had been destroyed by the earthquake and tsunami. The tsunami also caused major damage to ports in Palu. In Pantoloan Harbour, a Quay crane collapsed and was swept by the tsunami. In Wani Harbour, structural damage was reported, while Ogoamas Harbour moved 3 cm to its right due to the earthquake.

Officials confirmed that Palu's iconic bridge, the Kuning Ponulele Bridge, which was also the first arch bridge in Indonesia, was destroyed by the earthquake and the ensuing tsunami. Roads to and from the city, connecting it to Makassar and Poso, were also severely damaged. There were also reports of landslides.

Communication to the affected area was severely hampered, with President Joko Widodo being initially unable to contact governor Longki Djanggola. Local hospitals were damaged, with the Director of the Palu Undata Hospital opting to treat victims outside of the hospital and made a public plea for tents, medicine, canvas, and nurses. A warden for a prison in Palu reported that more than half of its 560 inmates fled in panic as the prison walls collapsed.

In the immediate aftermath of the earthquake, in Donggala prisoners rioted and set the prison on fire as they demanded to be met by their families. At least 100 prisoners managed to escape. The prison reportedly suffered severe damage.

Major soil liquefaction was reported in Sigi Regency, which was located south of Palu. Numerous eyewitnesses stated that the total amount of liquid, which was released by the soil, was so immense that buildings and structures were swept away. There were also reports that a whole village was gone.

A number of areas in Central Sulawesi have been hit by major mudflows following the earthquake and tsunami. The mudflow affected areas that survived both earlier events.

Since the vast majority of apparent deaths were tsunami related, the mudflow itself is an additional major disaster.

Petobo subdistrict in South Palu district, Palu, which is located 10-kilometers inland from the sea, has been struck by the mudflow, which is feared to have killed 2,000 people in the subdistrict, with homes having been dragged away by the mud.

All content from Kiddle encyclopedia articles (including the article images and facts) can be freely used under Attribution-ShareAlike license, unless stated otherwise. Cite this article:
2018 Sulawesi earthquake and tsunami Facts for Kids. Kiddle Encyclopedia.