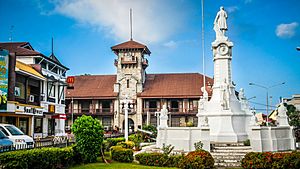 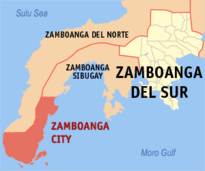 Zamboanga City (Chavacano: Ciudad de Zamboanga; Filipino: Lungsod ng Zamboanga) is a city in Mindanao, Phillippines. It is the sixth-largest city of the Phillippines.

Zamboanga City is called the "Sardines Capital of the Philippines". This is because 9 of the 12 sardine companies in the country are in the city. Other names for the city are "Asia's Latin City" and "City of Flowers".

The city of Zamboanga is politically divided into 98 barangays or barrios.

Many landmarks are in the city. These include:

All content from Kiddle encyclopedia articles (including the article images and facts) can be freely used under Attribution-ShareAlike license, unless stated otherwise. Cite this article:
Zamboanga City Facts for Kids. Kiddle Encyclopedia.