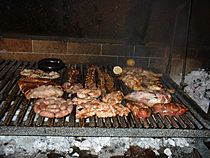 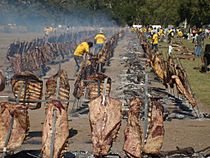 Asado is the barbecue of a social event in Hispanic/Latin culture. They are popular in Argentina, Chile, Paraguay and Uruguay. In these countries, asado is a traditional way of preparing food and a traditional event. An asado usually has of beef, sausages, and sometimes other meats, which are cooked on a grill, called a parrilla, or an open fire.

All content from Kiddle encyclopedia articles (including the article images and facts) can be freely used under Attribution-ShareAlike license, unless stated otherwise. Cite this article:
Asado Facts for Kids. Kiddle Encyclopedia.