Churrasco is the Portuguese and Spanish name for beef or grilled meat more generally. It is a prominent feature in the cuisine of Brazil, Uruguay and Argentina. The related term churrascaria (or churrasqueria) is mostly understood to be a steakhouse.

A churrascaria is a restaurant serving grilled meat, many offering as much as one can eat: the waiters move around the restaurant with the skewers, slicing meat onto the customer's plate. This serving style is called espeto corrido or rodízio, and is quite popular in Brazil, specially in southern states like Rio Grande do Sul, Paraná, Santa Catarina and São Paulo. 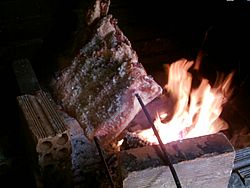 In Brazil, churrasco is the term for a barbecue (similar to the Argentine and Uruguayan asado) which originated in southern Brazil. The discovery of the churrasco is attributed to the indigenous community who inhabited the coast of South, Central and North America. They would roast the meat outdoors on a stone fire with the help of a grill made of green wood. However, it was in the region known as the great pampa in South America that the churrasco found its ideal setting. It uses a variety of meats, pork, sausage and chicken which may be cooked on a purpose-built "churrasqueira", a barbecue grill, often with supports for spits or skewers. Portable "churrasqueiras" are similar to those used to prepare the Argentine and Uruguayan asado, with a grill support, but many Brazilian "churrasqueiras" do not have grills, only the skewers above the embers. The meat may alternatively be cooked on large metal or wood skewers resting on a support or stuck into the ground and roasted with the embers of charcoal (wood may also be used, especially in the State of Rio Grande do Sul).

In Nicaragua, the first immigrant group to introduce the term for this cut of beef to the United States restaurant scene in Miami, Florida as early as the 1950s, it refers to a thin steak prepared grilled and served with a traditional chimichurri sauce- macerated parsley, garlic, peppers, and olive oil sauce.

In Argentina and Uruguay a churrasco refers to any boneless cut of beef that is sliced slightly thin as a steak and grilled over hot coals or on a very hot skillet. Gauchos would have grilled churrasco as part of their asado, now the national dish of both countries, served with salad and fried or mashed potatoes, and sometimes a fried egg.

In Puerto Rico it always refers to skirt steak, cooked on a barbecue grill. The chimichurri sauce is optional, since the meat is very savory with just a slight hint of sea salt that is sprinkled over the meat during cooking. It is also customary to replace chimichurri sauce with a guava rum sauce made with spices and 7up or Ajilimójili sauce.

In Ecuador churrasco is a staple food of the Coast Region, especially Guayaquil. The dish's main ingredient is the grilled steak that is seasoned with chimichurri, it is served with plantains, white rice, French fries, a fried egg, and slices of avocado.

In Guatemala, churrasco is regarded as a typical dish, often eaten in familiar gatherings and festive occasions. It is usually served topped with chirmol, a red sauce containing chopped tomatoes and onions, and accompanied by corn, guacamole, grilled potatoes, stewed black beans, rice and tortillas.

In Chile, churrasco refers to a thin cut of steak which varies depending on the desired quality of the sandwich. The slices are grilled and served in a -sometimes warmed- local bun (called "marraqueta", or "pan batido" in Valparaíso), usually accompanied with tomato, avocado and mayonnaise, in the case of a churrasco italiano. Another popular dish, churrasco a lo pobre ("poor man's churrasco"), consists of a churrasco served with French fries, fried egg, and caramelized onions. 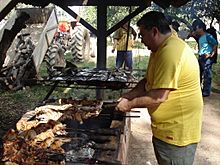 In Portugal, frango de churrasco with piri piri (a kind of salty roasted chicken cooked on the churrasqueira, spiced with hot red chili sauce, garlic and paprika) is very popular. Portuguese churrasco and chicken dishes are very popular in countries with Portuguese communities, such as Canada, Australia, the United States, Venezuela and South Africa.

The term churrasco is used in former Portuguese colonies—a churrasco moçambicano is a grilled meat dish from Mozambique, for instance.

In Galicia, churrasco refers almost exclusively to grilled pork or beef spare ribs. Galicians who emigrated to America in the 20th century took with them the recipe for churrasco. Nowadays, many Galicians of all social classes prepare a churrascada.

In the United States, churrasco-style restaurants have grown in popularity since the 1990s, fueled by the success of various chains, including Rodizio Grill, Texas de Brazil, Fogo de Chão, and Tucanos, as well as stand-alone Brazilian barbecue restaurants.

In North America, CHURRASCO is a registered trademark for rotisserie/grills manufactured by Hickory Industries, Inc. of Ft. Lee, New Jersey.

All content from Kiddle encyclopedia articles (including the article images and facts) can be freely used under Attribution-ShareAlike license, unless stated otherwise. Cite this article:
Churrasco Facts for Kids. Kiddle Encyclopedia.