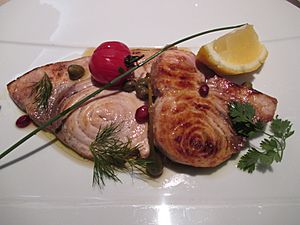 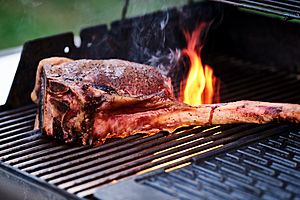 Beef steaks on a grill 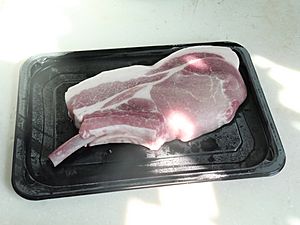 Steak is a slice off a larger piece of meat, usually beef. In North America, steaks are usually grilled. They are also often pan-fried or broiled. The most tender (softest) cuts of the animal are usually used for steak. This also means that steaks have a high price. The pieces of meat used for steaks are usually cut across the muscle fiber, not along it. This makes them appear more tender.

A restaurant that mainly makes steaks is known as a steakhouse. A well-known side dish to steak is prawns or a cooked lobster tail. This combination is often called surf and turf or reef and beef (the words "surf" and "reef" refer to the seafood and "turf" and "beef" refer to the steak). Special steak knives are used to cut steak. A steak knife is sharper than most table knives and is usually serrated.

Fish is not the only side dish for steak. Other common side dishes are baked potatoes, dinner rolls, salad, and corn on the cob. In France, steaks are often served with french fries. This combination is known as steak fries or steak-frites. They do not come with vegetables, but sometimes a salad is served with them.

Steak comes in a wide variety of cuts, which come from different parts of the cow. Some different cuts are:

Meat that is cooked less will appear to be more tender and soft. The usual degrees of cooking for steaks (and some other meats) are:

All content from Kiddle encyclopedia articles (including the article images and facts) can be freely used under Attribution-ShareAlike license, unless stated otherwise. Cite this article:
Steak Facts for Kids. Kiddle Encyclopedia.